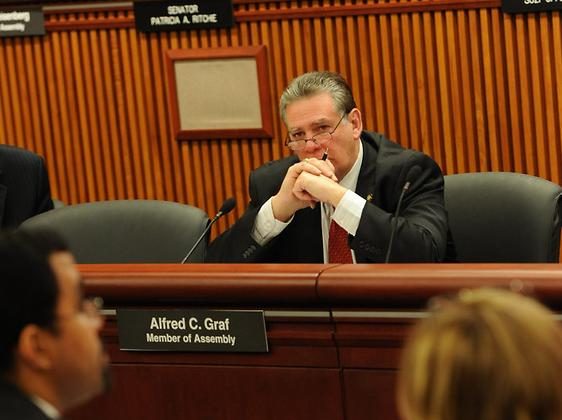 When I interviewed New York state Assemblyman Al Graf (5th AD, Suffolk County) in his Holbrook District Office, I planned as my first question to ask him about the controversial Common Core Curriculum. Graf, a Republican who serves in the Assembly’s Education Committee, has become known as one of the Curriculum’s harshest and most visible critics. But the two-term, 56-year-old assemblyman—whose district spans the townships of Brookhaven and Islip—beat me to the punch.

“Can you locate the area known as Mesopotamia on a world map or globe and identify it as part of Asia,” he asked me with the sound of total seriousness in his voice. And then he quickly followed up with a series of additional questions: “Do you know that this is the first question—and the next 80 are much tougher—that students in the first grade, yes the first grade, have to answer in English language arts as part of a so-called listening and learning strand following the guidelines of the New York State Common Core Curriculum? Does this make sense to you? Do you think that these questions are age-appropriate? Should a student’s promotion from one grade to the next be based on the ability to answer questions that are so age-inappropriate? Should teachers face disciplinary actions if their students are unable to correctly answer such questions?”

I left every one of Graf’s questions unanswered. But such and similar questions have been at the center of the debate surrounding the implementation of the Common Core State Standards (CCSS) in New York state (NYS) and across the nation.

Serving as an extension of the Obama Education Department’s Race to the Top program and developed and authored under the close guidance of the Obama White House by a committee composed of several state governors and state education officials throughout the country, CCSS establishes a set curriculum and ironclad benchmarks for the performance of students in grades K–12 on nationally standardized English language arts (ELA) and mathematics examinations.

NYS is among one of the 45 states that has adopted CCSS, which now in its transition phase across the country, was originally planned by the Obama administration to be fully implemented in the 2014–2015 school year.

That plan, however, has now been put on a temporary hold in many states as CCSS has met with resistance from growing numbers of parents, educators, and elected officials. To these critics, CCSS’s emphasis on high stakes nationalized standardized examinations and its institution of a set-in-stone, one-per-grade curriculum for students from their first to their final year in every public school is, in a theoretical pedagogical sense, totally unsound, and in a practical sense, totally unrealistic. To its proponents, however, CCSS is an innovative future-oriented program that will strengthen students’ critical thinking, writing, and computer skills, enabling them, say these proponents, to compete in an ever-increasing competitive global market.

Here in New York state, Graf fails to attach any such positives to CCSS. “This claim,” he asserted, “about placing a new emphasis on the teaching and learning of computers, higher-order thinking, and writing is laughable. This is exactly what’s been taught as part of the [New York state] curriculum over the past thirty years. Who do they think they are fooling by suggesting that they are presenting new and revolutionary goals?”

According to Graf, CCSS, unless stopped, will do irreparable harm to students in NYS and across the nation. “This [CCSS] is state-sponsored child abuse,” he stated. “It is predicated on the one-size-fits-all curriculum and testing practice, which all research has found inhibits, rather than enhances, the ability of students to grow socially, emotionally, and cognitively. And, as if to add injury to insult, if you take a look at the [CCSS] curriculum, you will find a host of grammatical errors. … What a horrible example for the students, whose education they claim to care so much about.”

Rather than being encouraged by a recent decision of Gov. Andrew Cuomo to establish a committee to further study CCSS and delay its the full implementation in NYS for two years, Graf believes that the governor is simply trying to fool the voters. “Gov. Cuomo will not oppose the president [on CCSS]. It would be against his long-term political interests if he did. All that he is doing by forming a committee and putting in a delay is temporarily kicking the can down the road, hoping the voters will forget before
Election Day. … The most onerous parts of CCSS still remain, including tying teacher evaluations to the performance of their students on standardized exams. This will turn schools from the places of learning they should be into test-taking warehouses.”

Referring to a bill he introduced last week, which calls for NYS to withdraw from Common Core and the related Race to the Top programs and replace it with a program that includes ending the emphasis placed on high-stakes testing and replacing it with an emphasis put on the use of best teaching practices, Graf said, “If the governor really were the advocate for our children that he claims to be, he would throw his full support behind this bill. He has absolutely no intention of doing so, and without that support, he knows that the bill will have little chance of becoming law.”

Graf is sometimes referred by his supporters in the anti-CCSS fight as the only member of the Assembly who was a former teacher. Such a description is technically true, but very much incomplete. Graf’s career line includes two years of service in his late teens in the U.S. Navy and 19 subsequent years of service as a NYC police officer, serving until an on-the-job injury forced him to retire. It wasn’t until then that Graf returned to college, earned a bachelor’s degree in elementary education, and began teaching in an alternative education program, which he left several years later to attend and graduate from Touro Law School, then starting his own law firm.

Graf told me that he is proud to have the title teacher associated with his name and believes whatever job he has had, he was, in a way, a teacher. “Based upon my experience as an educator, I truly see teaching as a noble profession. … But other jobs require that you be a teacher, also. … Whether as a police officer talking to troubled teens, or as any attorney representing victims of family violence, I always saw and continue to see myself as a teacher.”

Graf, the married father of a 29-old-son who works in private industry, and two girls in their 20s, one an artist, the other, following in her father’s footsteps, a member of the NYPD, said his goal as a legislator is to help build a state where all young adults including his own children will want to live and raise their own eventual families.

“Sometime in the near future I visualize my children with their future spouses and children sitting at the dinner table with my wife and me at our house enjoying a Sunday dinner,” he told me. “Such is a common hope, I believe, for all parents throughout the state. But because of New York state’s high tax rate, high unemployment rate and high cost of living, people in their 20s and 30s, particularly, are fleeing [the state] to low-tax, employer- and employee-friendly, and low-energy-cost states like Florida, Texas, and the Carolinas. I am working together with members of both parties to change policies to reverse this trend. … Why the governor is wasting his time with this Common Core nonsense while doing nothing constructive to try to solve the real problems facing New Yorkers is a question I would like to ask him.”

You bet he would.