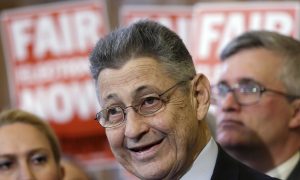 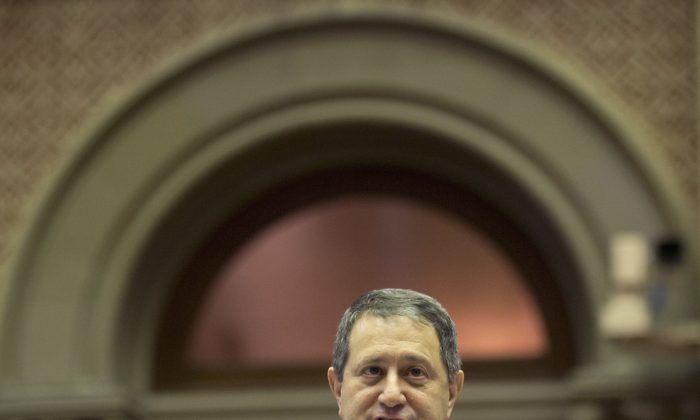 Assembly Majority Leader Joseph Morelle, D-Rochester, speaks in the Assembly Chamger at the Capitol on Tuesday, March 15, 2016, in Albany, N.Y. The Assembly plans to vote on limiting legislators' outside income to about $70,000 annually and to treat limited liability companies like other businesses that can give a candidate only $5,000 a year. (AP Photo/Mike Groll)
New York

ALBANY, N.Y.—New York’s Assembly voted March 15 to limit legislators’ outside income to about $70,000 annually and to treat limited liability companies like other businesses that can give a candidate only $5,000 a year.

Both ethics measures, similar to Gov. Andrew Cuomo’s proposals, are intended to curb the influence of outside money on state government.

Senate Republicans have opposed those measures. A bill to close the loophole allowing LLCs to donate up to $150,000 a year to a candidate without disclosing their owners died last year in a Senate committee following Assembly approval.

Many Assembly Republicans joined Democrats on March 15 in passing the bill 137-to-4. Several said they need to regain public trust, that it was a good first step and other measures are needed, like term and power limits on leaders and pension forfeits by officials convicted of corruption.

“Today I think we’re getting directly at the heart of the problems we had with our former speaker and also issues beyond that,” said Assemblywoman Sandra Galef, a Westchester Democrat. “It really addresses the amount of money you make outside when you’re not working and you’re making that money because you’re using your name.”

“Today I think we’re getting directly at the heart of the problems we had with our former speaker and also issues beyond that.”
— Assemblywoman Sandra Galef

The bill would prohibit the state’s 213 lawmakers from getting paid by law firms or others for simply putting their names on the letterhead or for making client referral recommendations, instead requiring actual work and proportionate pay.

Both were lawyers at the time and had outside incomes that exceeded the Assembly-passed limit, which would take effect next year. Prosecutors said Silver didn’t do any actual legal work for legal fees he was paid.

Assemblyman Andrew Goodell, a Chautauqua County Republican, voted against the bill. It would have the effect of keeping successful people out of the Legislature, he said.

Base yearly pay for lawmakers is $79,500. Cuomo proposed limiting their outside pay to 15 percent of their salaries, similar to limits on Congress. New York legislators, whose last raise came in 1999, that would have about a $12,000 cap.

The Assembly bill would allow outside income up to 40 percent of the pay rate for state Supreme Court justices, who currently are paid $174,000 annually. A state commission has proposed raising it to $193,000.

Lawmakers’ disclosures showed only seven senators and 17 Assembly members with 2014 outside incomes above the Assembly limit, including Silver and Skelos. Most legislators had working spouses and investment income, which would remain exempt from the threshold.

Cuomo told reporters March 15 he’s disappointed in the Senate’s lack of any ethics proposal and that the Assembly is at least attentive to the issue, though it’s outside income limit is too high.