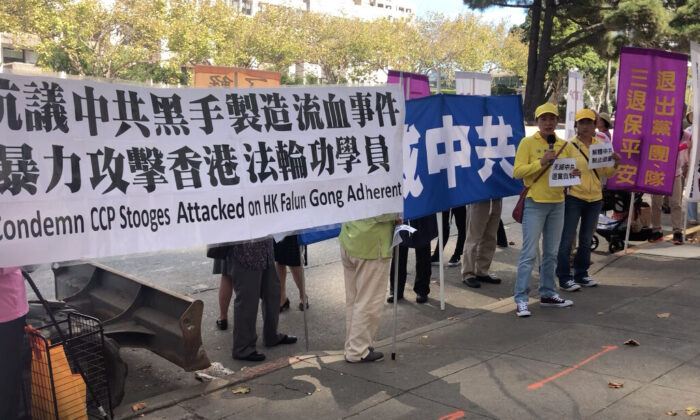 SAN FRANCISCO—A group of local residents protested in front of the Chinese Consulate in San Francisco on the morning of Sept. 25, urging the Chinese regime to stop its violent assaults against practitioners of the spiritual discipline Falun Gong in Hong Kong.

Liao Qiulan, a Falun Gong practitioner, was assaulted in public shortly after she left Changsha Police Station in Hong Kong around 4 p.m. on Sept. 24. Liao’s reason for visiting the police station was to arrange the details of a Falun Gong parade planned for Oct. 1.

Liao reportedly suffered a head injury from the attack and lost a lot of blood.

Falun Gong, also known as Falun Dafa, is a spiritual practice that has been persecuted by the Chinese Communist Party (CCP) since 1999. It includes five meditative exercises and moral teachings on how to live by the principles of truthfulness, compassion, and tolerance.

Due to its health benefits, Falun Gong spread by word of mouth and attracted millions of practitioners after it was introduced to the public in 1992. Chinese government statistics showed that close to 100 million people were practicing Falun Gong by the late 1990s.

In July 1999, the CCP launched a violent campaign of persecution against Falun Gong. This type of persecution is typical of the Chinese communist regime, which has been oppressing religious and ethnic minority groups in China for decades. Falun Gong practitioners in China have been subjected to imprisonment, harassment, torture, and even death since 1999.

Oct. 1 is the National Day of China. According to the Chinese regime’s state-owned media, the CCP will put on a “bigger than ever” ceremony in Beijing’s Tiananmen Square this year to celebrate the 70th anniversary of the regime.

Jian Hongzhang, spokesperson of the Hong Kong Falun Buddha Association, stated after the assault on Liao that there was no doubt that the attack was a behind-the-scenes operation by the CCP. Jian strongly urged Hong Kong authorities to investigate the incident, find the responsible parties, and bring them to justice.

Jian said the CCP has extended its persecution of Falun Gong to Hong Kong.

During the Sept. 25 protest at the Consulate in San Francisco, the protesters’ spokeswoman, Gao Lin, said that Falun Gong practitioners have been peacefully raising awareness of the persecution to people around the world. However, the Chinese regime has never stopped its brutal oppression of Falun Gong.

The protesters also connected over the phone with Liang Zhen, an Epoch Times reporter in Hong Kong, and had Liang talk about the situation in Hong Kong.

Liang told the protesters that three violent attacks took place in Hong Kong on Sept. 24. Liao’s case was only one of them. The two other attacks were on a pro-democracy legislator and a reporter for the Apple Daily newspaper.

Liang said that the two men who attacked Liao had black cloth covering their faces and used police batons to attack her. The attack only lasted for about a minute, and the two men quickly ran away after Liao yelled for help.

Joe Ng, one of the protesters at the Consulate, said that Hong Kong no longer has a different political system from the one in China. As an immigrant from Hong Kong, he commented that Hong Kong used to be called the Pearl of the Orient, but now it has become a cage of the Orient. Hong Kong people live without freedoms, just like living in a cage, he said.

Another protester at the Consulate was Wang Chongming, a Falun Gong practitioner and a former judge in China. He lost his job in China because of his personal belief in Falun Gong. He and his family fled China in 2014, and he has lived in the United States ever since.

Wang said the CCP wants to put on a big propaganda show about its own success on its National Day while knowing many protests against the CCP will take place all over the world. The attack on Liao was meant as a threat to the people who are against the CCP, he believes.

Fang Zheng, chairman of Chinese Democracy Education Foundation, also spoke to the San Francisco protesters over the phone. Fang said that Falun Gong is a well-known peaceful group, and the CCP’s attack on Falun Gong only shows the tyrannical nature of the Chinese regime.

Fang was one of the students who joined the 1989 Tiananmen Square student pro-democracy movement. He lost both of his legs after a tank caught him from behind and rolled over his body during the Tiananmen Square Massacre. Fang has lived in the United States since 2009.