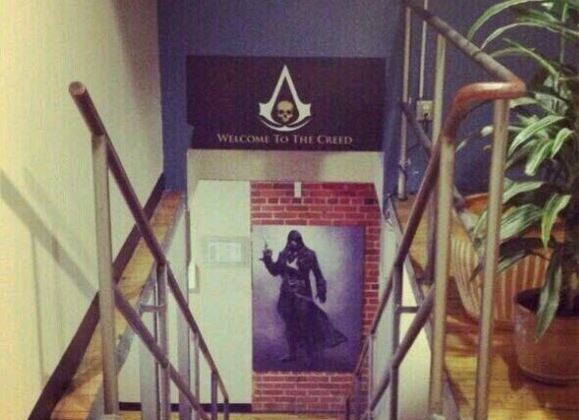 A picture leaked this week purportedly shows the hero in the upcoming Assassin’s Creed V.

Details about the game have been scarce while rumors have proliferated.

That includes about the setting of the game, although a leaked press release allegedly says that the game will take place in London during the Industrial Revolution.

This newly leaked picture is supposedly from the wall of the office of Ubisoft in Montreal.

“There is a pretty big image of a new character. And although the photo is not of very good quality, nevertheless a revolver–a weapon that appeared in the late 1830s–can be seen in the right hand of the protagonist. Is it a coincidence? We don’t think so, but so far we can only speculate, basing on a variety of rumors, but very soon, as it seems to us, the developer will remove the veil of secrecy and will officially announce Assassin’s Creed 5 game,” according to Game Space, which published the photo.

Ubisoft did recently announce a new Assassin’s Creed 4: Black Flag edition, which is called the Jackdaw Edition, that will be available on March 27. The edition will include all released add-ons.

The cost for the Jackdaw Edition is not known yet.

The company also announced that it’s working on five projects. Rumors indicate that Assassin’s Creed 5 is one of them.