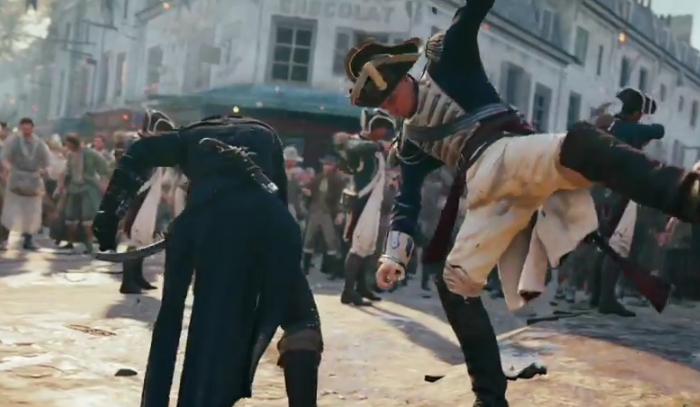 A new Assassin’s Creed 5 (Unity) trailer has been released, showing some actual gameplay.

Protagonist Arno Dorian is seen helping out with the resistance effort in the trailer, released by Ubisoft on Monday.

The game is set during the French Revolution.

Dorian is shown as athletic and dangerous as he kills guards both up close and from afar in the footage.

The game is one of the more highly anticipated, and was recently announced to be hitting stores on October 28.

The game will be for Xbox One, PlayStation 4, and PC.

Another trailer was also released, titled “Inside the Revolution.”

“Published on Jul 14, 2014 Paris, 1789. Commoners starved in the streets while aristocrats squandered the wealth of the nation,” the description says.

“Desperate and angry, they united and revolted against the power at hand and started the Revolution! … But did the people truly lead the fight? Or did obscur forces use this time of chaos to spread their power?”

The other description says: “Paris, 1793. Paris is plunged into chaos. In this dark era, one man will give commoners the courage to take up arms against the oppressors. Discover Arno as he fights for justice and raises people’s hope for freedom and unity. “

Another game, Comet, is rumored to be under development as well, for Xbox 360 and PlayStation 3.

Official information is slated to come out about Comet soon.

“More info on that soon,” he said, reported IGN. “It will come soon.”

Comet will allegedly star a Templar in North America, sailing around the coast.

“Assassin’s Creed Comet will reportedly be set in North America and have you play as a Templar named Shay. Of course, the Templars have traditionally served as the main antagonist group for the entire Assassin’s Creed series, so this would be a major shift in design,” Gamespot said previously.

Comet is also said to be a direct sequel to Assassin’s Creed VI: Black Flag.