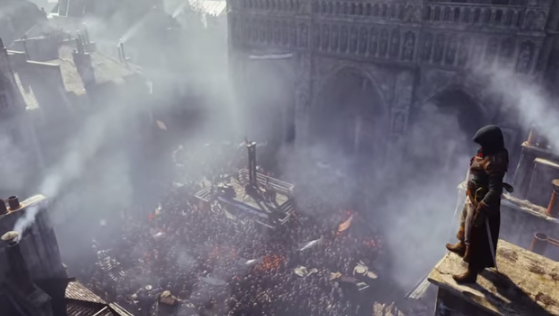 The game will be released in fall 2014 on PlayStation 4, Xbox One, and PC.

A separate game codenamed Comet will be released on Xbox 360 and PlayStation 3, according to Kotaku, which obtained the leaked screenshots.

Despite taking several years each to produce, Assassin’s Creed games have typically been released every year because multiple studios are working on different games simultaneously.

A sneak peek released for the game shows that it’s set in the French Revolution, around the late 18th century or early 19th century.

Prior games, including Assassin’s Creed III, have covered dozens of years and involved multiple generations of assassins.

“We have been working on the new Assassin’s Creed for more than three years and although we weren’t quite ready to show you our full vision for a next-gen only AC, it seems Abstergo are trying to force our hand!” Ubisoft said in its trailer release.
“So here’s a true first look at in-game footage from Assassin’s Creed Unity. Stay tuned – we’ll have many more exciting details for you in the months ahead!”