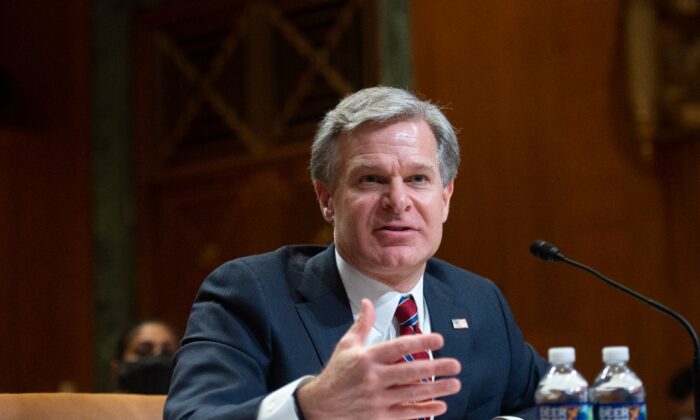 FBI Director Christopher Wray speaks during a Senate Appropriations Subcommittee hearing on the fiscal year 2023 budget for the FBI at the U.S. Capitol in Washington on n May 25, 2022. (Bonnie Cash - Pool/Getty Images)
Immigration & Border Security

Terrorists from organizations including Al Qaeda and ISIS seek to gain entry the United States and commit acts of terrorism against its citizens every single day, according to testimony by FBI Director Christopher Wray. In many cases, they attempt to do so by illegally crossing the southern border.

“Certainly, any porous point of entry is a potential vulnerability that bad actors of all sorts, including national security threats, can seek to exploit,” Wray said during a May 25 Senate Appropriations Committee hearing on the FBI’s proposed budget for FY2023.

Wray made the comments in response to a line of questioning by Sen. Jerry Moran (R-Kan.), who asked whether there was a persistent threat from known or suspected terrorists attempting to cross the border illegally.

During the questioning, Moran explicitly highlighted the case of Shihab Ahmed Shihab, who was charged on May 24 for his alleged role in organizing a plot to smuggle assassins into the country to kill former U.S. President George W. Bush.

“According to press reports, the Suspect, an ISIS operative, was recorded claiming to have just smuggled two individuals associated with Hezbollah into the United States,” Moran said.

Likewise, Sen. Bill Hagerty (R-Tenn.) questioned the efficacy of processes currently in place at the border to prevent the entry of known or suspected terrorists.

Hagerty raised issue with the case of Isnardo Garcia Amado, a Colombian national on the terrorist watch list, who crossed the southern border into Arizona, was screened at the FBI terrorist screening center and released into the United States. In that case, it took three days for the FBI to send confirmation that Isnardo was on the terrorist watch list, and an additional two weeks before an arrest warrant was issued.

“You would think that DHS would have immediately arrested this person, yet despite knowing that a suspected terrorist had been released in the United States, the leadership of the Department of Homeland Security didn’t even authorize ICE to arrest him until two weeks later,” Hagerty said. “He was in Florida by that time.”

Hagerty said that there was a clear threat to national security when immigration laws permitted known and suspected terrorists to enter the country before being identified, and said that there was no way to determine how many people on the terror watch list were released into the United States.

“I’m deeply concerned about this,” Hagerty said. “When I went to the border myself about six weeks ago, I was informed that 157 different nationalities had been apprehended at our southern border in the past year.”

For his part, Wray acknowledged the seriousness of the issue, and underscored the fact that threat actors from Al Qaeda, ISIS, and other terror organizations not only still existed, but were actively sending people to attempt to enter the United States in order to conduct terrorist attacks.

The episode follows a series of escalations in violence and crime at the United States’ southern border, including an alleged hit being placed on an Arizona Sheriff’s border patrol team by a drug cartel, and a massive influx of deadly fentanyl smuggling, largely sourced from China.