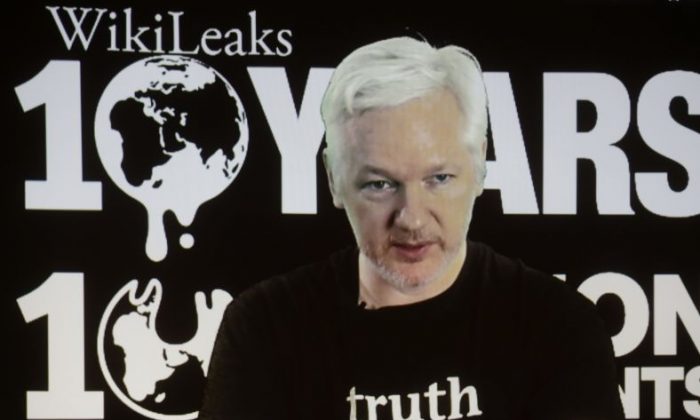 WikiLeaks founder Julian Assange participates via video link at a news conference marking the 10th anniversary of the secrecy-spilling group in Berlin, Germany, Tuesday, Oct. 4, 2016. Assange said that WikiLeaks plans to start a series of publications this week, but wouldn’t specify the timing and subject. (AP Photo/Markus Schreiber)
2016 race

Assange of WikiLeaks Says Source of Emails Not From Russia

“The Clinton camp has been able to project a neo-McCarthyist hysteria that Russia is responsible for everything. Hillary Clinton has stated multiple times, falsely, that 17 US intelligence agencies had assessed that Russia was the source of our publications. That’s false—we can say that the Russian government is not the source,” Assange said, reported RT.

Some analysts and media outlets have claimed that the WikiLeaks emails were hacked by Russian intelligence agencies. In October, the Homeland Security Department and Office of the Director of National Intelligence said they were “confident” that the Russian government “directed” this year’s leaks.

Assange has said that WikiLeaks will not reveal the identity of its sources.

Law enforcement sources told Fox News on Wednesday that an investigation into the Clinton Foundation was now a “very high priority.”

“There is an avalanche of new information coming in every day,” one source told Fox News, adding that some of the information is coming from the WikiLeaks-released documents and emails.