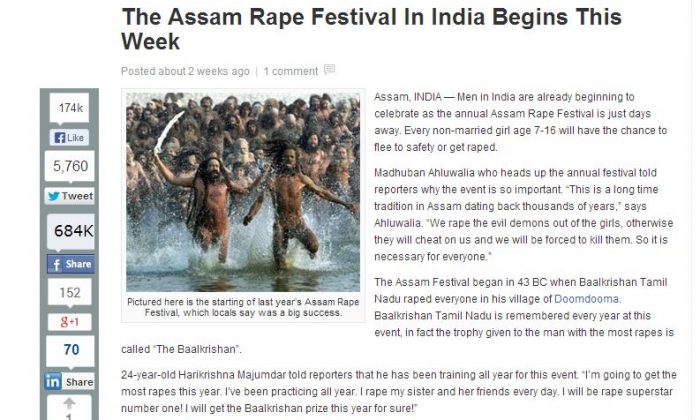 The 'Assam Rape Festival' article as seen on the National Report.
Social Media

In the past, The National Report has caused confusion among readers because it doesn’t clearly state that it’s satire, and it doesn’t have the name-recognition of The Onion, considered the most prominent satire news publication. For example, a number of conspiracy-related websites have reported on and even republished a National Report satire about RFID chips being implanted in people as a result of an obscure Obamacare clause.

The “Assam Rape” article has generated hundreds of thousands of likes and shares on Facebook. The content of the article states that every “non-married girl age 7-16 will have the chance to flee to safety,” or they will be sexually abused.

It also quotes a fake official, Madhuban Ahluwalia, as saying it is “a long time tradition in Assam dating back thousands of years.”

But it goes even further than most articles one would see on The Onion, as it offers a link to an apparently real website that asks for donations to support Indian women. It also includes a phone number for the “24-hour India Rape Festival” hotline.

The National Report used to have a disclaimer on its website saying it is satire, which is accessible via Archive.org.

“National Report is a news and political satire web publication, which may or may not use real names, often in semi-real or mostly fictitious ways. All news articles contained within National Report are fiction, and presumably fake news. Any resemblance to the truth is purely coincidental,” it states.

The disclaimer has since been removed.

But now, Indian media reports say that officials in Assam are angry over the content of the “Assam Rape” article.

“The fraudulent and extremely unethical article about the completely fictitious festival is an act of serious disrespect and total disregard shown towards the humble and unsuspecting people of of Assam,” local official Barnali Saikia Bora told the Deccan Herald.

Simanta Sharma, president of the Assam Society Of Bangalore, said that the National Report offers “no disclaimer saying the article is a spoof. People mistook it for fact.”

Indian petitioners have sought an apology from the website.

“We are a community which puts women on a high pedestal. Even the practice of dowry is not prevalent in our community,” Sharma said, according to the Times of India