Liquid Solar Technology Could Be Next Gen of Renewable Energy
0 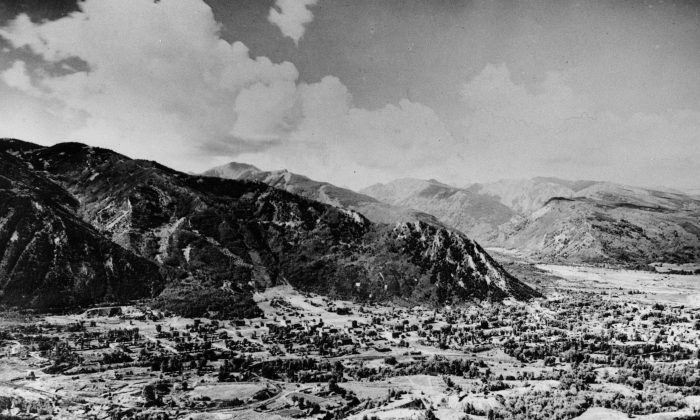 This general view shows the silver mining town of Aspen, Col., in the Rocky Mountains, at an elevation of about 7,900 feet, and 180 miles southwest of Denver, in June 1949. (AP Photo)
US

After more than 10 years of transitioning energy resources by increasing some sectors and decreasing in others, Aspen, a remote city in the Rocky Mountains of Colorado has reached its goal of 100 percent renewable energy, joining the ranks of major power players Burlington, Vermont, and Greensburg, Kansas.

The first American municipality west of the Mississippi to use hydroelectric power in 1885, Aspen has been ahead of the curve right from the start.

But in 2005 the city took it to another level with the Canary Initiative, which recognized that Aspen and other mountain mining communities were particularly vulnerable to the effects of climate change, according to Aspen’s website.

The city, with a current population of just over 6,600, was founded during the silver mining boom of the 1880s, when the population and wealth of the city intensely increased. For a number of years, after various precious metal and coal booms, Colorado towns suffered the consequences of toxic metals leaking from abandoned mines and high carbon dioxide emissions in the air.

With the new initiative, Aspen set out to aggressively reduce its carbon footprint. And by 2007, it turned the initiative into an action plan, which set the tone for working toward even greater energy goals.

How They Did It

When Aspen installed hydroelectric powered streetlights in the 1880s, the needs of the municipality were not on the first settlers’ minds. They needed to service the mines. Little did they know that some day the power they created from water would largely contribute to undoing the damage they were causing with the mining.

In 2005, the city enlisted the help of its residents through the Canary Initiative, which educated the public on what a carbon footprint is and how they could make simple changes to reduce GHGs. With input from the community, the city took small achievable steps to prepare for climate impacts, and prioritized which areas were most affected by a changing climate.

After identifying key areas like tourism and recreation, water, energy, and ecosystems, the city implemented projects and programs aimed at helping people improve energy efficiency of their homes and businesses through rebates and incentives.

Residents were also encouraged to help reduce the 43 percent of GHGs from gas and diesel transportation by riding the bus, sharing a bike, or enrolling in the Car To Go program. The program offers a fleet of hybrid cars that members use only when they need it and pay only for what they use. In addition to reducing the carbon footprint, members can save money and eliminate the responsibilities of car ownership.

After two years of educating, instituting projects and programs, local officials tracked each community’s progress in reducing emissions from 2004 levels then implemented their own Climate Action Plan in 2007 with an eye toward the first leg of their goals. “It was a very forward-thinking goal and truly remarkable achievement,” said Hornbacher.

The plan, designed to directly tackle GHGs, set out to “do more with less energy.” It utilized existing technology and further improved energy efficiency by switching the power grid from fossil fuel-generated sources to all renewable energy.

But the city is not resting on its laurels and is investing in more projects that offset and avoid carbon dioxide emissions. Officials are planning to add more renewable sources to the fuel mix over the next few years to ensure they can meet the ultimate goal.