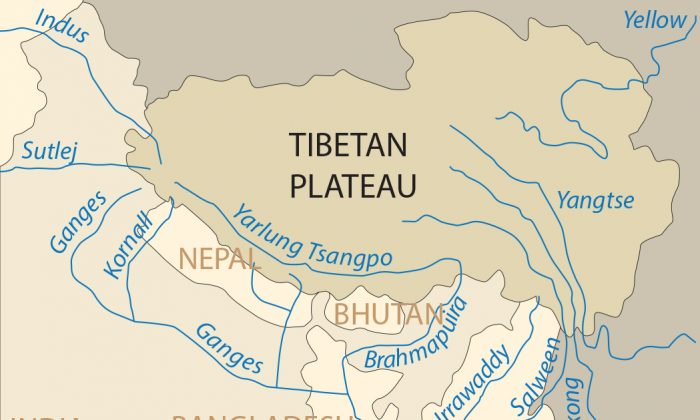 The hidden story of China's exploitation of Tibet's lands and water

When Chinese Premiere Hu Jintao flew into New Delhi on March 28, 2012, for the BRIC Summit, he careened onto unfamiliar terrain: a democracy with a free press where a 27-year-old Tibetan refugee, Jamphel Yeshi, walked to a public protest, poured kerosene over his body, and lit himself on fire while shouting for an end to Chinese atrocities in Tibet.

The searing images from India of Jamphel Yeshi’s burning body exposed to the world the cost of China’s reign of terror in Tibet, which has been well concealed for 61 years.

Since March 16, 2011, 121 people inside Tibet and 6 people outside Tibet have lighted themselves on fire in public in defiance of Chinese Communist assaults on their Buddhist faith, but there are no journalists or diplomats to bear witness to the carnage, only raw video that reaches the Internet.

There is another potent source of this explosion of Tibetan outrage, which receives negligible international coverage: the covert history of China’s rape and pillage of Tibet’s ancestral lands and waters.

In Asian folklore Tibet is known as “The Western Treasure House.” Its people have been careful stewards of this bounteous terrain for millennia. Tibet’s blessing, its remote plateau, is now its curse: China controls the “Third Pole” with an iron fist, and there is no one to stop it.

The elemental facts about Tibet are not widely known, yet any map of the Tibetan Plateau reveals the enormous resource and strategic advantage gained by its capture.

Tibet is a unique geomorphic entity; its 46,000 glaciers comprise the Earth’s third-largest ice mass. This “Third Pole,” filled with pristine riches of wildlife, minerals, timber, and above all, water, is a vital component of the planet’s ecosystem.

Tibet is the fount of the Yangtze, Yellow, Indus, Brahmaputra, Chenab, Sutlej, Salween, and Mekong rivers, which flow through 11 nations, nourishing 3 billion people from Peshawar to Beijing. Today, all but one of Asia’s great rivers—the Ganges, which rises from the Tibetan plateau but fortunately just outside the Chinese border—are controlled at the Tibetan headwaters by the Chinese Communist Party.

In 2000, China launched a vast development project titled “Xi bu dai fa,” the Opening and Development of the Western Regions (of Xinjiang and Tibet, which together comprise one half of China’s land mass). A massive influx of Chinese settlers, urbanization, and forced relocation of nomads swiftly followed.

The Xizang railway, which opened in 2006, transports Tibet’s vast supplies of minerals, stone, and lumber to the mainland and brings in a flood of Chinese engineers and laborers who have built at least 160 hydro dams across Tibet and have plans for hundreds more.

Chinese engineers now operate multiple dams and mines all across Tibet, polluting the rivers at their source—you can see all of this on Google Earth. The Chinese government dismisses concerns of its own scientists and those of neighboring states alarmed by a sudden decline in water levels and fisheries.

In the 1990s, China refused to sign the U.N. treaty on transboundary rivers and increased militarization of the Tibetan Plateau, while denying journalists and international observers access to the troubled region.

Author Michael Buckley, who captured rare footage of dam construction in his film “Meltdown in Tibet,” observes: “China doesn’t have to listen to anyone on this. China has Tibet, so China has all the cards.” (For Mr. Buckley’s videos and archives visit MeltdownInTibet.com)

When recently asked about the crisis in Tibet, Chinese official media stated: “The Dalai Lama reminds us of the uncontrolled and cruel Nazis during the Second World War. … How similar it is to the Holocaust committed by Hitler on the Jews!”

Many diplomats and journalists are puzzled by China’s obsessive demonization of the Dalai Lama, the distinguished Nobel Peace Prize Laureate, but the Politburo’s Stalinoid hysteria works. It squelches any and all rational discussion of China’s exploitation of Tibet’s resources, and subverts attention away from how Chinese mines and dams have created a looming environmental catastrophe on the world’s most populous continent.

The preservation and management of Tibet’s glaciers and the rivers they sustain is one of the greatest challenges facing humanity in the 21st century. In the 11 countries through which Tibet’s waters flow, population growth and industrial development is projected to double within 50 years.

The combined effects of rapid development, desertification, and water scarcity have already created extreme cycles of droughts and floods, food shortages, and pandemics. The Chinese mainland is so imperiled that in April 2011, the Yangtze River water flows were at their lowest level in record.

Yet, despite irrefutable evidence of the dangers of overexploiting Tibet’s water resources, the Chinese government will not modify or downscale plans for dams, tunnels, railroads, and highways across the Tibetan plateau.

Since Chairman Mao invaded Tibet in 1951, China has deployed a huge military infrastructure across the Tibetan Plateau, which gives China a continuous border with Thailand, Burma, Bhutan, India, Nepal, and Pakistan. The border areas are now filled with military airfields and PLA battalions. In the coming age of “water wars,” China has a firm hand on the water tower of Asia.

China insists that Tibet is “an internal affair of the state,” and for decades, the world has turned away in uncomfortable silence as the slaughter of a helpless civilian populace continues without impediment or penalty. The Chinese Communist Party has for 61 years controlled the narrative, but to ignore Tibet is to misread how the Chinese occupation intensifies environmental, economic, and military instability in Asia and the world.

Tsetan, a Tibetan journalist based in Delhi, says: “For years, we have protested the desecration of our culture, the yoking of our rivers, and the mining of our sacred mountains, but China will not listen: They shoot us, torture us, and there is no one to stop them. Now people inside Tibet are driven to burning their bodies to get the world to understand what China is doing to Tibet, and the world had better wake up before it’s too late.”

Maura Moynihan is a journalist and researcher who has worked for many years with Tibetan refugees in India and Nepal. Her works of fiction include “Yoga Hotel” and “Kaliyuga.” This article was previously published by Rangzen Alliance (rangzen.net).

Maura Moynihan
Follow
works with China team Maura Moynihan is a journalist and researcher who has worked for many years with Tibetan refugees in India and Nepal. Her works of fiction include “Yoga Hotel” and “Kaliyuga.”