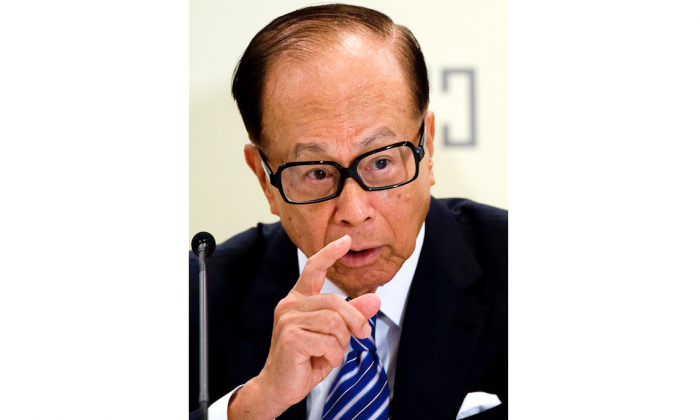 Hong Kong billionaire Li Ka-shing, who has rarely spoken to the media in recent years, gave an exclusive interview last month on his political opinions and a wide range of other topics to the Chinese state-run Southern Metropolis Daily.

Li is the chairman of Hutchison Whampoa Limited (HWL) and Cheung Kong Holdings and Asia’s richest person according to the Bloomberg Billionaires Index. The interview took place in his Cheung Kong Holdings office and covered topics such as his opinion of Chief Executive Leung Chun-ying, the kidnapping of Li’s eldest son, Li’s divestment from Hong Kong stocks, and Hong Kong’s stringent property policy.

The 5-page interview was published on Nov. 28 and also appeared in Southern Weekly, attracting widespread public attention across Hong Kong and China.

Many people took Li’s criticisms of Leung Chun-ying as a clear message that Li was against Leung and instead belonged to the camp of Chinese Communist Party (CCP) head Xi Jinping.

This view was reinforced by the fact that Li chose to give his interview to the Southern Metropolis Daily, a known mouthpiece of the Xi Jinping camp. Chief Executive Leung, on the other hand, supports the faction tied to former CCP leader Jiang Zemin.

The day before the interview was published, a white envelope containing white powder arrived at the Securities and Futures Commission office of Cheung Kong Holdings. The staff reported this to the police, and some people speculated that this meant Li’s interview had made the Jiang faction nervous.

Li also disclosed details of the kidnapping of his son, Victor Li Tzar-kuoi, by gangster Cheung Tze-keung in 1996. Li said he paid the kidnapper a large ransom and asked him to stay away and stop committing further crimes.

An anonymous retired former CCP official, who was in charge of the affairs of Hong Kong and Macau and now lives in Hong Kong, said he suspected that when Li spoke of his son’s kidnapping and described his attitude and advice to the kidnapper, this was a hint about his current situation. The former official said it was to a large extent a message to Leung Chung-ying and former Politburo Standing Committee member Zeng Qinghong of the Jiang faction.

According to the former official’s analysis, Li was hinting that Leung and Zeng had blackmailed him, a situation similar to facing the kidnapper. The former official said that Li Ka-shing has been constantly blackmailed by the Jiang faction headed by Zeng Qinghong, who was in charge of Hong Kong affairs for the CCP.

The Li family was reportedly threatened by CCP agents who infiltrated a labor strike at one of Li’s container terminals this April. The former CCP official said he thought Li Ka-shing chose to mention his son’s kidnapping to spell out his position on the current threats.

Li said in the interview that if he had a chance to start all over, he would consider getting involved in politics. He expressed regrets that he had never done so in the past.

There have recently been political upheavals in Hong Kong amid the Xi-versus-Jiang struggles, and China has undergone drastic political changes after the Third Plenary Session. Xi Jinping quickly replaced a number of provincial and military officials, and the CCP headquarters publicly released messages opposing one another, taking the side of either Xi Jinping or Zeng Qinghong.

Li’s interview stirred controversy in the Hong Kong community over whether or not Li is involved in politics.

During the Chief Executive election, Li supported Henry Tang rather than Leung. However, when asked in the interview if he thought he should reconcile himself with Leung, Li replied, “There was never any grudge. What’s there to reconcile?”

He added that he could not predict political changes or influence politics, and there is no use worrying if political issues are directed toward him. Even so, he said that he would study the details of the Third Plenary Session.

Li said that he would have less desire to invest where there are unfair policies, bad operating environments, and when the government selectively exercises rights of rule.

Another area that has been much discussed is Li’s recent divestments and what they might mean. Earlier this year it was announced that Li’s company HWL was selling the major grocery chain ParknShop and spinning off Hong Kong Electric.

These divestments have become a media focus, but Li Ka-shing said in the interview that he does not like the term “divestments” and it is not true that he is divesting from Hong Kong.

During the container terminal strike this April, some people called Li’s company a “real estate hegemony.” Li rejected this as a joke.

He said that the real estate developers are not hegemonic; instead, the government are the ones who conduct the Hong Kong property market and tax policy, none of which is decided by developers.

“We earn far more money overseas than in Hong Kong,” Li said. “We’ve bought less in Hong Kong in the past two or three years. The price of land in Hong Kong is high, and we see an unhealthy trend.”

This year, he said, their property sales were the worst they have been in 13 years.

Li added that HWL and Cheung Kong Holdings will never leave Hong Kong, and the buildings in which he works will certainly not be for sale.

Li said Hong Kong’s core values are its good legal system and its free, open market, and that this is where Hong Kong’s competence lies.

When asked if the property policy of Hong Kong affects his decisions to invest there, Li said that the government must be based on the rule of law and solidly executed in a fair and just manner. He added that Hong Kong must not be under the “rule of man,” and power must not be exercised selectively.

Li said that the law should not be affected by changes of individual leaders or officials, and that policies should first and foremost give confidence to the business sector.

He added that there are many investment opportunities all over the world, and if he has to choose, he will certainly choose a place where there is rule of law in order to be responsible to the shareholders.

Former Chief Secretary Anson Chan recently told Hong Kong media that she agreed with Li that Chief Executive Leung and his senior officials should not exercise their power selectively. She added that she hopes Leung realizes that his popularity is declining continuously.

She also agreed fully with Li that the most important thing in Hong Kong’s rule is that it is based on laws, not on people.