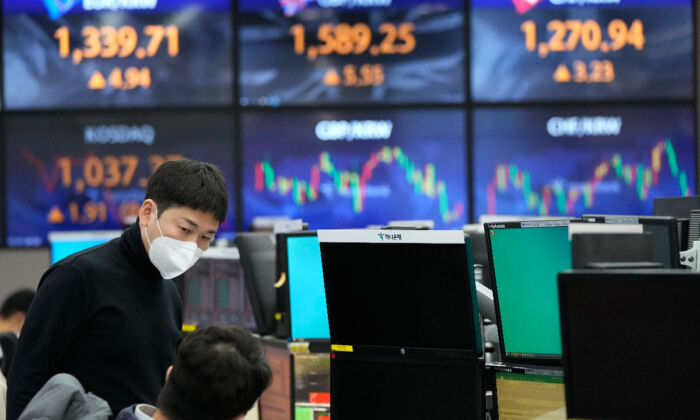 Currency traders talk to each other at the foreign exchange dealing room of the KEB Hana Bank headquarters in Seoul, South Korea on Nov. 17, 2021. (Ahn Young-joon/AP Photo)
Market Watch

At a three-hour meeting on Nov. 15, the two leaders dialed down some of the heat in Sino-U.S. tensions, though both sides held to entrenched positions on a range of issues. The positive tone offered a slight boost to Asian shares on Nov. 16, but this proved short-lived.

In Asian trading on Nov. 17, Tokyo’s Nikkei 225 index lost 0.4 percent. The benchmark reversed earlier gains that had come on the yen trading lower recently, boosting the profits of exporters.

MSCI’s broadest index of Asia-Pacific shares outside Japan skidded 0.5 percent from Tuesday’s near three-week closing high and was set for its biggest fall this month, snapping seven days of gains.

“Any concrete development from the meeting still awaits to be seen, but the amiable approach thus far in addressing issues from both parties pares down the risks of political tension in markets,” said Yeap Jun Rong, market strategist at IG in Singapore.

Companies have been raising prices as they face higher raw materials costs and supply chain problems. Consumers have been willing to pay more. Investors also received another encouraging update from the Federal Reserve that industrial production rebounded in October with a 1.6 percent gain, following a 1.3 percent plunge in September.

“It reiterates the strength of the U.S. consumer, but you have to wonder a bit as inflation expectations rise, are people rushing to get in front of that,” said Mike Stritch, chief investment officer at BMO Wealth Management.