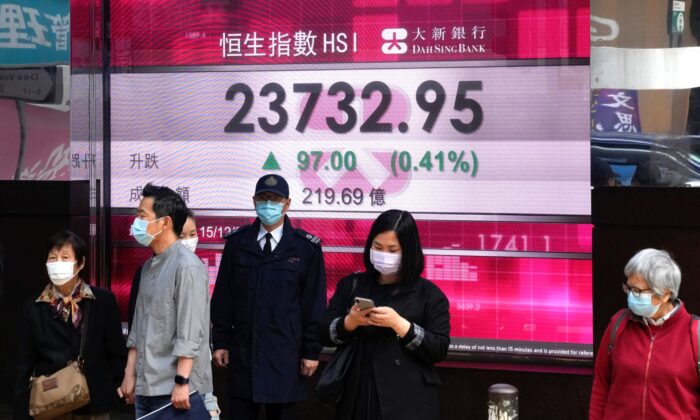 BANGKOK—Stocks were mostly lower in Asia on Wednesday after new U.S. data showed inflation is still running high, putting a spotlight on what action the Federal Reserve will take as it holds its last meeting of the year.

“COVID-19 remained the key reason holding back a full recovery. Efforts to contain the virus flare-up beginning in mid-October lasted through most of November as infections reached 21 provinces, making consumers more cautious,” Mark Williams and Sheana Yue of Capital Economics said in a commentary.

A second omicron case was reported confirmed in China on Wednesday, underscoring the persisting threat from infections as new coronavirus variants emerge.

The selling came after the Labor Department reported that prices at the wholesale level surged by a record 9.6 perecnt in November from a year earlier. The department’s producer price index measures inflation before it reaches consumers.

Businesses have been dealing with supply chain problems and higher costs for months and are passing those costs to consumers, who have so far been absorbing higher prices on everything from groceries to clothing and other consumer products. On Friday, the Labor Department reported that consumer prices surged 6.8 percent for the 12 months ending in November, the biggest increase in 39 years.

The discouraging reports on inflation preceded the Federal Reserve meeting which started Tuesday.

The Fed is expected to speed up the process for trimming bond purchases, which have helped keep interest rates low and support the stock market and broader economy. Beyond that, investors are watching the central bank for any statements on how soon it might raise interest rates in 2022.

Wall Street is also closely monitoring any news on the newest coronavirus variant that is spreading rapidly in Britain and some other regions. It appears to cause less severe disease than previous versions of the coronavirus, according to an analysis of data from South Africa.

Energy sector stocks fell following a 0.8 percent drop in the price of U.S. crude oil. On Wednesday, U.S. crude gave up 90 cents to $69.83 per barrel. Brent crude, the basis for international pricing, lost 81 cents to $72.89 per barrel.