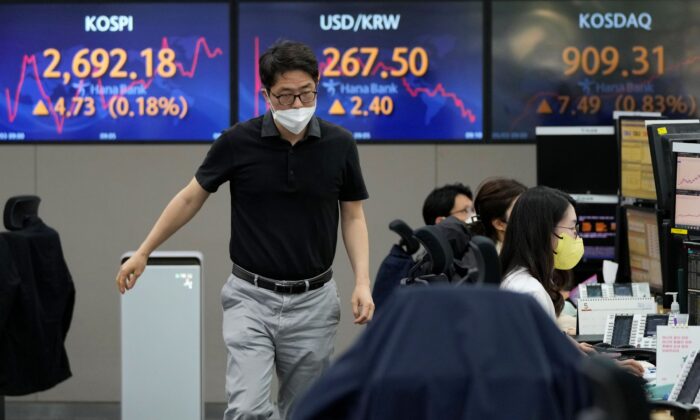 A currency trader passes by screens showing the Korea Composite Stock Price Index (KOSPI) (L), and the exchange rate of South Korean won against the U.S. dollar (C) at the foreign exchange dealing room of the KEB Hana Bank headquarters in Seoul, South Korea, on May 3, 2022. (Ahn Young-joon/AP Photo)
Stocks

Asian shares were mixed Tuesday after Australia’s central bank raised a key interest rate for the first time since 2010.

Trading was light with markets in mainland China, Japan, and some other countries closed for holidays.

Investors also are expecting another rate hike by the U.S. Federal Reserve as it and other central banks accelerate efforts to curb inflation. The central bank is expected to raise short-term interest rates by double the usual amount when it releases its latest statement on Wednesday. It has already raised its key overnight rate once, for the first time since 2018, and Wall Street is expecting several big hikes in coming months.

That will make it more costly to borrow—for a car, a home, a credit card purchase and may weaken the economy. It also would draw investments out of stocks into other assets as their yields rise. Ultra-low interest rates helped drive stocks to unprecedented highs during the pandemic and now that process is being reversed.

Smaller company stocks also reversed course after spending much of the day in the red. The Russell 2000 index rose 1 percent to 1,882.91.

Bond prices fell, pushing yields higher. The yield on the 10-year Treasury was at 2.98 percent after rising to 3.00 percent on Monday. It hadn’t been above 3 percent since Dec. 3, 2018, according to Tradeweb.

The uneven start to May follows an 8.8 percent skid for the benchmark S&P 500 in April led by Big Tech companies, which started to look overpriced, particularly with interest rates set to rise sharply.

Just over half of the stocks in the S&P 500 closed higher, with the technology and communication sectors driving much of the advance. Chipmaker Nvidia and Facebook’s parent company, Meta Platforms, each rose 5.3 percent.

The broader market often bends to the direction of technology stocks. Many companies in the sector have pricey stock values and therefore have more force in pushing the major indexes up or down.

Still, it’s unusual for tech stocks to rally at the same time that bond yields are rising. That’s because higher yields make bonds increasingly attractive assets relative to more risky and expensive stocks, particularly those of technology and other growth-oriented companies.

U.S. benchmark crude oil lost 27 cents to $104.90 per barrel in electronic trading on the New York Mercantile Exchange. It gained 48 cents to $105.17 per barrel on Monday.

Concerns about rising inflation have been hanging over the latest round of corporate earnings. This week will bring more, with Pfizer reporting results on Tuesday, CVS Health on Wednesday, and Kellogg on Thursday.