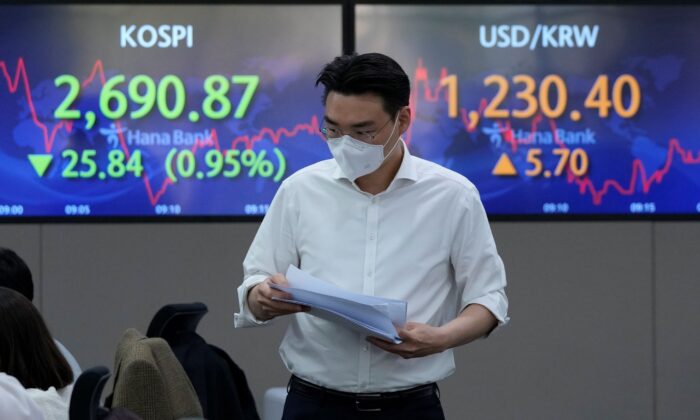 TOKYO—Asian shares fell in muted trading as most world markets were closed for Good Friday and other holidays.

After markets closed, China’s central bank freed up extra money for lending to support the slowing economy by cutting the amount of reserves commercial banks are required to hold.

The move added about 500 billion yuan ($85 billion) to the pool for lending, a relatively modest sum compared with the size of China’s economy.

Shutdowns in major Chinese cities due to coronavirus outbreaks and the war in Ukraine have been weighing on sentiment.

“The Russia-Ukraine conflict inflation effects are now more meaningful than direct military developments in a market sense. These consequences have fabricated an uncertain environment that could keep investors wary,” Stephen Innes of SPI Asset Management said in a commentary.

“It should be a quiet session given the Good Friday holidays,” he added.

The head of the International Monetary Fund warned Thursday that Ukraine’s conflict was darkening the outlook for most countries and reaffirmed the danger high inflation presents to the global economy.

Musk has criticized Twitter for not living up to free speech principles and said, in a regulatory filing, that it needs to be transformed as a private company. Twitter’s stock fell 1.7 percent at $45.08 Thursday, well below Musk’s offering price.

The number of people seeking unemployment benefits ticked up last week, according to the Labor Department, but remained at a historically low level. The data reflect a robust U.S. labor market with near record-high job openings and few layoffs.

Inflation remains at its highest levels in 40 years in the U.S. and that has economists and analysts closely watching how consumers react to higher prices on everything from food to clothing and gasoline.