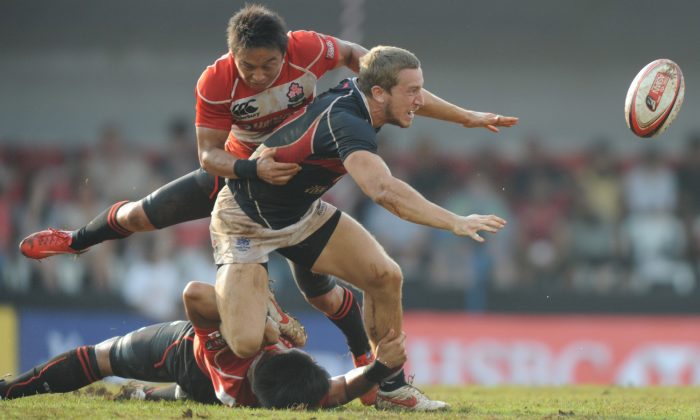 Wing Tom McQueen and the HKG 7s Team will be hoping to shrug off Japan in 2014. (Hong Kong RFU)
Hong Kong

The Asian 7’s series will comprise 3-rounds (2-rounds for women), one each in Hong Kong, Malaysia (Kuala Lumpur—Sept 6-7) and China (Shanghai—Oct 18-19) In this competition there will be 20 teams taking part 12 men’s team and 8-women’s.

The Asian Sevens Series is seen as increasingly important this year as the first 2-rounds are seen as a tune-up for the men’s and women’s Rugby Sevens at the 17th Asian Games in Incheon at the end of September.

Hong Kong won all of their matches in the Round-Robin stage beating UAE, Uzbekistan and hosts Malaysia on day-1, and continued their winning form on day-2 winning a close match against Thailand 14-6 and then beating Singapore 43-5. Hong Kong beat Malaysia 25-14 in the final to top the table on 6-points