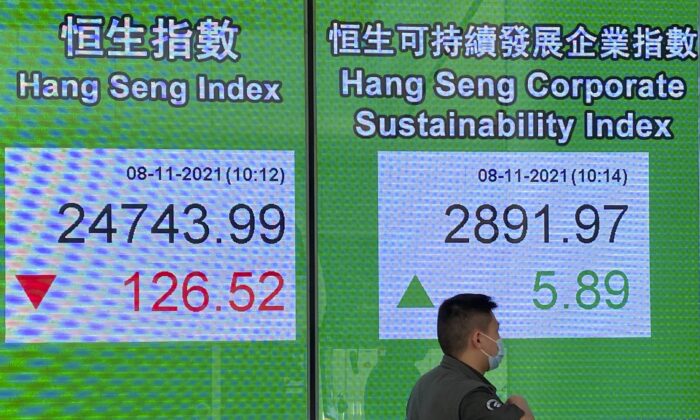 A man walks past a bank's electronic board showing the Hong Kong share index at the Hong Kong Stock Exchange on Nov. 8, 2021. (Vincent Yu/AP Photo)
Markets

U.S. employers hired more people than expected in October, according to government data released on Friday.

Despite that gain, Chinese anti-virus controls might dampen factory and consumer activity, “still bringing about an uncertain recovery picture,” Yeap Jun Rong of IG said in a report.

On Wall Street, futures for the benchmark S&P 500 index and Dow Jones Industrial Average were down less than 0.1 percent.

This week, the U.S. government is due to report inflation. Investors are worried that the Federal Reserve and other central banks might feel pressure to cool rising prices by pulling back stimulus that is boosting stock prices.

Investors also hope for possible updates on policy toward technology and other industries after data security and anti-monopoly crackdowns on Chinese tech giants that began late last year wiped more than $1 trillion off their total stock market values.