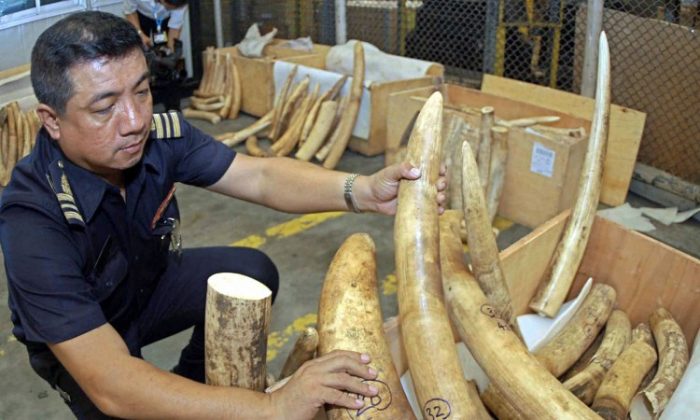 Five tons of ivory worth around $14 million wait to be burnt on June 27, 2011, in Libreville, Gabon, to mark his government’s commitment to battling poachers and saving elephants. (Wils Yanick Maniengui/AFP/GettyImages)
World

The WWF said Vietnam did particularly poorly, receiving “two red scores”—out of green, yellow, or red—for tigers and rhinos, and was dubbed “as the top destination country for rhino horn, which has fueled a poaching crisis in South Africa.”

Last year, a record was set for the number of rhinos killed in South Africa, 448. This year, 262 rhinos have already been killed, and this number is on track to outpace last year’s record.

“It is time for Vietnam to face the fact that its illegal consumption of rhino horn is driving the widespread poaching of endangered rhinos in Africa, and that it must crack down on the illegal rhino horn trade,” stated Elisabeth McLellan, the global species manager at WWF.

Vietnam should immediately “curtail retail markets, including Internet advertising for horn” and look into its penalty system, she added.

The report evaluated 23 African and Asian nations that face high levels of poaching and trafficking of parts belonging to those three animals, with some nations doing better than others. All the nations reviewed were found to have illegal trade practices.

China and Thailand were found to be the top destinations for African elephant ivory, the group said. Tens of thousands of elephants are being killed each year for their tusks. The report called on the two countries to clamp down on the trade.

“In Thailand, illegal African ivory is being openly sold in upscale boutiques that cater to unsuspecting tourists,” McLellan said.

In Central Africa, elephants have been slaughtered by poachers in unprecedented numbers. In one incident this year, hundreds of elephants were killed in a national park in Cameroon.

“Given the escalation of elephant poaching in Africa and the increased levels of organized crime involved in the trade, it is clear that the situation is now critical,” stated the report.

“Although most Central African countries receive yellow or red scores for elephants, there are some encouraging signals. Last month Gabon burned its entire ivory stockpile, to ensure that no tusks would leak into illegal trade,” WWF Global Species Manager Wendy Elliott stated.

India and Nepal showed improvement in all aspects of compliance and enforcement regarding parts from all three species, the report found.