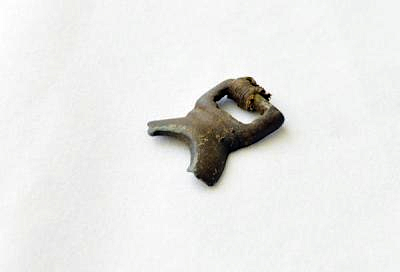 This buckle-like object is the first prehistoric bronze artifact made from a cast ever found in Alaska and appears to have originated in East Asia. (Jeremy Foin/University of California, Davis)
Beyond Science

A buckle-like object discovered in an ancient Eskimo dwelling is the first known prehistoric cast bronze artifact to be found in Alaska, and is suspected to have originated in East Asia.

The object is about 2 inches by 1 inch, and less than 1 inch thick. It looks like a rectangular bar connected to a broken circular ring, and may be a belt buckle.

The find was made during the excavation of an early Inupiat Eskimo house, that is roughly 1,000 years old, at the Seward Peninsula in the Bering Land Bridge National Preserve.

“I was totally astonished,” said project leader John Hoffecker at the University of Colorado Boulder (CU-Boulder) in a press release.

“The object appears to be older than the house we were excavating by at least a hundred years.”

A small piece of leather wrapped around the rectangular bar was found to be from about 600 A.D. using radiocarbon dating, although this may not be the actual age of the bronze object.

The artifact’s resemblance to a buckle suggests it could have originally been part of a horse harness or ornament, but the Eskimos may have used it to fasten clothing or perhaps as part of a shaman’s trappings. However, its exact function remains unclear.

The object is unlikely to have originated from Alaska as bronze metallurgy was unknown in this region. CU-Boulder researcher Owen Mason said in the release that it was probably forged in East Asia, and reached Alaska through long-distance trade from production centers in either China, Manchuria, Korea, or southern Siberia.

Or perhaps the earliest Inupiat Eskimos who settled northwest Alaska brought the object with them around 1,500 years ago from Siberia via the Bering Strait.

“It was possibly valuable enough so that people hung onto it for generations, passing it down through families,” Mason explained.

The excavations are part of a project designed to study human response to climate change at Cape Espenberg from 800 to 1,400 A.D.