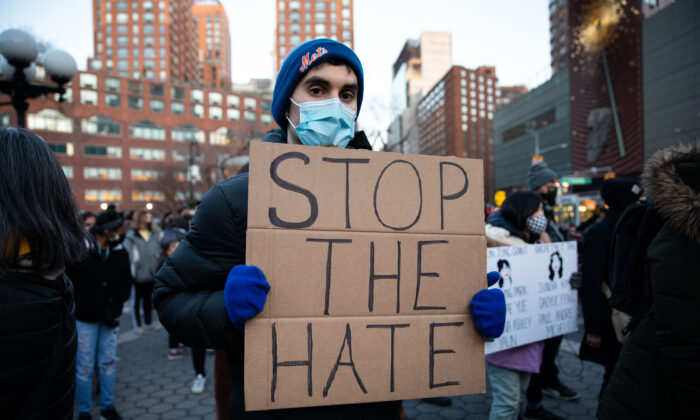 A new Los Angeles County report (pdf) identifies a significant rise in anti-Asian hate crimes, but critics say the crimes may not be race-motivated.

The Los Angeles County Commission on Human Relations released a statement Oct. 20 showing a total of 44 anti-Asian crimes reported in 2020—a 76 percent increase from the previous year’s data.

“If the system examines everything through the lens of race, that will make things worse including crime rates and hate crimes,” Frank Xu, president of the non-profit organization Californians for Equal Rights and co-founder of San Diego Asian Americans for Equality, told The Epoch Times.

As a longtime social activist, Xu has been closely working with his community in fighting for equal rights for Californians.

Xu said that whenever he heard such talk from his friends, he would encourage them to attribute the cause of the crime to one’s race only if they exhaust all other assumptions.

“When I lived in China, I experienced conflicts with others. In a homogeneous country, no one would say it is racism,” Xu said. “In America with the current environment, it’s so easy for people to blame the conflicts on racism.”

The Department of Justice defines a hate crime as a crime that is “motivated by bias against race, color, religion, national origin, sexual orientation, gender, gender identity, or disability.”

According to LA County Sheriff’s Department, a hate crime will be considered when one acts against another’s religion, ethnicity, sexual orientation, gender, disability, or association with a specific group.

Anthony Lim, who immigrated to the United States forty years ago said he feels safe in his community and never heard of racial profiling until the Obama administration took over the office.

He believes that when these crimes occur it is very hard to identify whether it is a hate crime. Sometimes the victims just happened to be the easy targets to the suspects.

“It is just one person doing harm to another person. … Sometimes you must assess the situation yourself, so you don’t become a victim of crime,” Lim told The Epoch Times.

Kristy Hu, a recent college graduate from University of California–Los Angeles said she has become more self-conscious after seeing videos of Asian women being attacked at a supermarket.

Hu said she felt venerable when she went out to a market or a gas station.

“I think the right way to go about it is to focus that the Asian community does get targeted, and they are being unfairly used as a scapegoat for causing coronavirus. This gives racist people an excuse to act out their thoughts,” Hu told The Epoch Times.

The data used for analysis in the report were collected based on the hate crimes reported to the Sheriff’s Department from over 40 city police departments, police agencies in schools, and community-based organizations.

The report indicated the number of anti-Asian hate crimes being reported this year is the largest number since 2001, when there was a total of 80 anti-Asian racial hate crimes reported.

The report found that in the cases in which the suspects were identified, 42 percent were white, 36 percent Latino, and 19 percent African American. In the previous year, the largest number of suspects involved in anti-Asian hate crimes were Latino.

Michael Kapp, a spokesperson for LA County, said the county’s Human Relations Commission released the report specifically on Asian hate crimes, as opposed to all hate crimes, “because of the significant increase in reported anti-Asian hate crimes.”

Kapp said a full report, which will include hate crimes against all races, will be released in November.