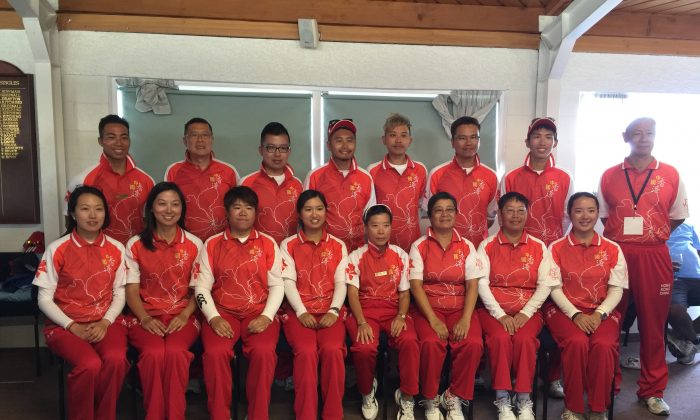 COME ON HONG KONG – the Hong Kong team that is participating in the 2015 Asia Pacific Championships in Christchurch, New Zealand, continue their search of the first medal since 2009. (Hong Kong Lawn Bowls Association)
HK Lawn Bowls

The Hong Kong lawn bowls team performed well in the first week of the Asia Pacific Championships, getting through to the knock-out stage of two of the four disciplines participated. With the games continuing this week, the team is working hard to better last event’s record of four play-offs.

Held every four years, the 2015 Asia Pacific Championships is staged at Burnside Bowls and Papanui Bowls clubs in Christchurch, New Zealand, from November 24 to December 6. The event brings together 165 players from 18 countries or regions. In addition to the prestigious titles, bowlers finishing in the top eight in each discipline will qualify for the 2016 World Bowls Championships.

Last time in Adelaide, Australia, the Hong Kong team reached the play-offs for men’s singles, pairs and triples as well as the women’s pairs. They were all beaten at this stage and returned empty-handed.

The results showed that lots of improvement were required from the team, according to Heron Lau, Vice President of Hong Kong Lawn Bowls Association, “Originally we set a target of achieving World Bowls qualification for all eight disciplines but now we have lost two of them. The result is still kind of acceptable but it also indicated that we still have a lot to do to ensure that our team is competitive in the international arena.”

This year in the men’s pairs, Ken Chan and debutant Terry Kung won their first four games against Japan, Fiji, Brunei and China before suffered a first defeat at the hand of USA. They then beat Norfolk Islands but lost to New Zealand in the last game to finish third of the group.

They faced a strong Malaysia team in the play-off and started well, winning six shots in the first two ends and add a six on the fifth end. But then the Malaysian team picked up the rhythm and started their fight-back from the eleventh end. They took nine shots in four end to lead Hong Kong and moved on to win the game 22-18.

The women’s fours of Amy Choi, Dorothy Yu, Angela Chau and Vivian Yip won four of the six games in the round robin stage to finish third of the group. They met the Malaysian team who they had beaten in the first game of the tournament but it was the Malaysians that prevailed this time.

The games continued this week with the Hong Kong team shifting their attention to the four remaining disciplines. The last time Hong Kong won medals at the Asia Championships was in 2009 when they took bronze from the men’s triples and women’s fours.

All finals will be played this Friday, Saturday and Sunday.