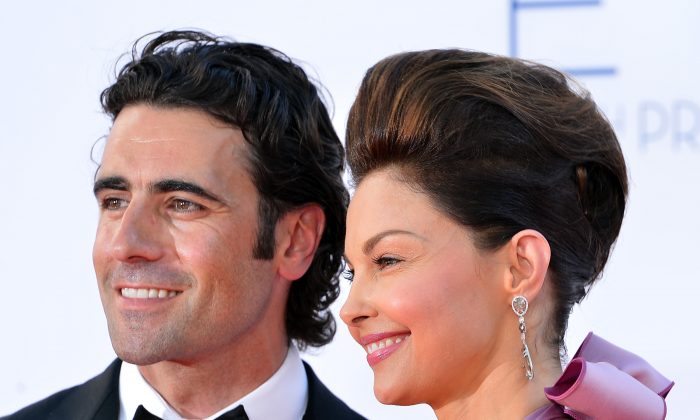 Ashley Judd and Dario Franchitti in September 2012 in Los Angeles. Judd rushed to her estranged husband's side on Oct. 6, 2013 after he got into a car crash. (Frazer Harrison/Getty Images)
Sports

Ashley Judd rushed to be with Dario Franchitti on Oct. 6 after Franchitti got into a high speed crash at Nascar race.

“Thank you for the prayers for @dariofranchitti,” said Judd via Twitter after the crash. “I have only clothes on my back & the dogs but that’s all that we need & we are on our way.”

A day later, she said: “Amazed by the incredible outpouring of care & prayers. Thanks, everyone. Keeping our heads down here & doing what’s in front of us to do.”

Three-time Indianapolis 500 winner Dario Franchitti was undergoing a second surgery on Monday after the crash.

He broke his right ankle and, fractured two vertebrae in his spine, and suffered a concussion.

Although Judd and Franchitti are married, they announced in January that they separated, though neither has filed for divorce, according to US Weekly.

“We have mutually decided to end our marriage,” the couple said in a statement at the time. “We’ll always be family and continue to cherish our relationship based on the special love, integrity, and respect we have always enjoyed.”

The status of their relationship is unclear at the moment.

“Thank you to everyone for all the well wishes. They mean a lot to me,” Franchitti said in a statement from Target Chip Ganassi Racing. ” I would also like to send my best to all the fans involved in the accident and hope that everyone is all right.”

The accident occurred when Franchitti ran into the back of Takuma Sato’s car and launched over it and into the fence during the last lap of the Grand Prix of Houston. 13 fans and an IndyCar official were injured by the debris.