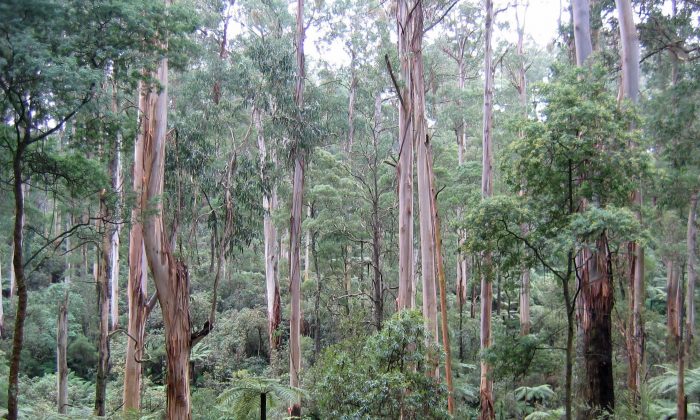 In February 2009, the Black Saturday bushfires swept through the Mountain Ash forests of Victoria, burning 72,000 hectares.

These forests are home to the tallest flowering plants on the planet, and iconic species such as the Leadbeater’s Possum, Victoria’s animal emblem. In the six years since the fires, we and other scientists have been investigating how the forests have recovered, summarized in our new book. This research was in turn built on 25 years of research before the fires.

There’s some good news and some bad. The forests and their inhabitants have a remarkable capacity for recovery from natural disturbances like fire. However, the forest ecosystem is in a precarious state, largely due to the continuation of Victoria’s logging industry.

Some species seemed to fare well after the fires, or even to have benefited from them. In the week leading up to the 2009 fires, 18 Brushtail Possums were fitted with radio-tracking collars, and all were found alive two months later.

After the fire, Flame Robins arrived in the forest in huge numbers to take advantage of hunting opportunities in the open burnt forest.

The native Bush Rat and carnivorous Agile Antechinus (a minute relative of the Quoll and Tasmanian Devil), were hit hard by the fire. Their numbers were initially severely reduced but then recovered to be equally or more abundant in burnt than unburnt forest within three years.

In contrast, other species have struggled in the post-fire environment, such as the Greater Glider and Leadbeater’s Possum.

Recent research on the Leadbeater’s Possum has highlighted how this species (which was recently up-listed to Critically Endangered status) is absent from sites and landscapes burned in the 2009 fires. The species is even absent from unburned patches within otherwise burned landscapes.

This, in turn, underscores the critical importance of intact areas of unburned and unlogged Mountain Ash forest. Indeed, analysis of the viability of populations of Leadbeater’s Possum clearly shows that a large ecological reserve is essential to prevent the species’ extinction.

In fact, immediately before to the last state election, Labor made a written commitment to one of us (David Lindenmayer) via formal email to establish the Great Forest National Park to secure populations of Leadbeater’s Possum. They have even set up a Task Force to do just that.

Yet recent state government commitments to the ongoing logging of ash forests significantly jeopardize both the park and the persistence of the Leadbeater’s Possum.

Kicking the Forest While It’s Down

Widespread industrial clear-felling logging has continued across the Mountain Ash forest estate since the 2009 fires. The industry is primarily a pulpwood industry focused on making paper and supports very few direct jobs.

Most importantly, the interaction of fire with logging has left the forests in a perilous state. For instance, past clear-fell logging operations results in Mountain Ash forests being at significantly greater risk of crown-scorching fire. This elevated fire risk effect persists for more than 40 years as forest regrow.

This is something the Victorian government needs to be acutely aware of, particularly for the protection of human lives in an environment where climate change also will contribute to future risks of recurrent wildfire. Significantly expanding the very limited area of old growth Mountain Ash forest will be critical for tackling serious fire risk issues.

The combined effects of widespread logging and wildfire mean that just 1.16 percent of the Mountain Ash forest ecosystem is old growth. This is 1/30th to 1/60th of what historically once occurred.

The Mountain Ash forest as a functioning ecosystem is now classified as Critically Endangered under the IUCN Ecosystem Assessment protocol.

There are yet other problems. Vegetation studies in Mountain Ash forests show that logging of burned areas directly after the 2009 wildfires—termed salvage logging—had enormous negative impacts on native plants. Populations of important plant species such as Tree Ferns were depleted by 95-99 percent in comparison to burnt but unlogged areas. Overall species diversity, that is, the number of different native plant species, are reduced by up to 30 percent in post-fire salvage logged areas. These changes will have long term negative impacts on the architecture of Mountain Ash forests.

There are many other major issues in Mountain Ash forests. For example, the supply of sawlogs is being rapidly depleted and VicForests in their most recent Annual Report admit there is enormous uncertainty about what will happen after that. Perhaps the sawlog industry will collapse.

Getting Better Value From the Forests

Perhaps the forest will be burnt for biomass energy. This would add significantly to the already high levels of greenhouse gas emissions generated from logging native forests.

Indeed, it is clear that for forest management to assist in tackling dangerous climate change, wood products need to be sourced from plantations, not from native forests.

This does not mean the end of the forest industry or forestry jobs—far from it. It simply means that the bulk of feedstock needs to come from plantations, with native forests used primarily for the long term storage of carbon, to maximize water production, conserve biodiversity, and promote tourism.

Our long-term data has enabled us to start compiling detailed integrated economic and environmental accounts in Mountain Ash forests. These accounts use the United Nations Environmental Accounting procedure. These accounts show unequivocally that the dollar value per hectare per year of water from Mountain Ash forest far exceeds the dollar value per hectare per year of paper and timber products—and by a very large margin. Given there is a trade off, where logging significantly impairs water production, this is an important land use decision both for the people of Melbourne and rural communities.

The negative effects on water production underscore the value Victorians lose from logging Mountain Ash forests. Economically and environmentally, Victorians will be far better off investing in a large ecological reserve. The economic benefits of doing this is hardly new ground.

Almost a decade ago, in the book Lost Landscapes and Failed Economies Professor of Economics Thomas Power presented numerous case studies demonstrating the major disadvantages of continuing to subsidize limited numbers of jobs in extractive industries that are, as he terms: “ultimately not sustainable”. He also analyzed the significant economic and employment benefits of reserve-based economies following transition away from extractive industries. Victorian Mountain Ash forests should be added as yet another example.

David Lindenmayer is a professor at The Fenner School of Environment and Society (FSES) at the Australian National University (ANU). David Blair and Lachlan McBurney are senior research officers at FSES-ANU. Sam Banks is an ARC future fellow at FSES-ANU. This article was previously published on TheConversation.com