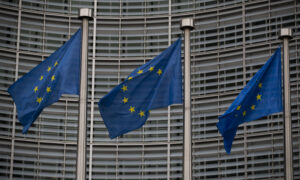 With all the turmoil on twitter and other social media in recent weeks about the antics of Irish teenagers, it’s good to hear about a positive action that actually helps young people.

The local community in Ashbourne, Co Meath have launched a new initiative to start a youth cafe in a bid to create a stable environment for local teenagers. Local businessman Alan Tobin is one of those driving the enterprise, and he spoke to The Epoch Times about the reasons for starting the cafe.

“It will basically be a little drop-in place where a teenager can go; it will be their own space, where they will have a big input on what goes into the space and the activities there,” said Tobin.

The cafe is being supported by the Meath Youth Federation, whose mission is to “to offer young people in Co Meath social, personal and educational activities in a dependable and professional way, seen by them to be worthwhile and fun while being constructive for their future and the future of their communities.”

Elaborating on the form the cafe will take, Tobin said, “It’s a place where teenagers can come and chill out, play their games and meet their friends.”

It won’t be all fun and games of course. Tobin says there will also be educational slots were volunteers will come in and speak on important issues, local activities, etc.

“It’s about getting them off the streets and it’s aimed towards guys and girls who don’t necessarily have that much interest in sport. There isn’t an awful lot for them to do in a structured sense,” said Tobin. “If you’re not into sport, where do you go? This will be a place where they can do their bits and pieces inside a structured and supervised environment…they won’t have to feel that the only place for them to go is to hang around a street corner somewhere.”

The cafe will cater for young people from age 14 to 18. Tobin said that they are trying to keep costs to a minimum, as the cafe won’t be charging for the service. The young people and the local community will therefore have to support the cafe through various fundraising activities to pay for running costs, etc.

The cafe will be relying on volunteers to run the initiative, and the organisers have been requesting more people to sign up for this. Garda vetting of volunteers will be required.

“We will also be looking for a lot of local craftsmen to help with doing the location up before opening. We’re trying to get it done on a shoe-string budget, but if the community are involved in setting it up, it will be a source of pride in the area, especially if the young people are getting the benefit out of it,” said Tobin.

“There are a lot of teenagers out there who are under pressure from exams and other things, so this will be a place where they can come in the evenings, where they can chill out and not have to worry, a lot of them could be out on the streets messing, doing drugs, drinking…at least this is a place where they will be able to come in, have a bit of crack, and play some games. They will have supervision, but it won’t be their parents breathing down their necks,” said Tobin.

He is hopeful that other groups and clubs will spring up through collaborations formed between the group members and volunteers.

“This will benefit the town—we will see the young people take ownership of the cafe and run it in such a way that there’s a real feel-good element, they might even visit other youth cafe’s, maybe have art exhibitions. There’s a drama teacher who wants to do some drama with them, it’s an outlet that will be something different and will have a load of areas of different interest. It won’t be a place where you just go and do nothing; it will be a resource for people to use and try things they would have never normally done. I think it will benefit the whole community,” said Tobin.

On Sunday, August 25th at 11 am, Alan Tobin and the team from the youth cafe are organising a 6km and 10km fun run in Ashbourne. If you don’t want to run in the event you can sponsor someone who is participating, or perhaps you could sponsor a kilometre sign along the course. There is also a kid’s play area that could be sponsored, and there are the start and finish lines. The event is time-chipped if you want to be timed, but Alan Tobin assured us that it’s also a fun run—so no pressure on the athletes…!