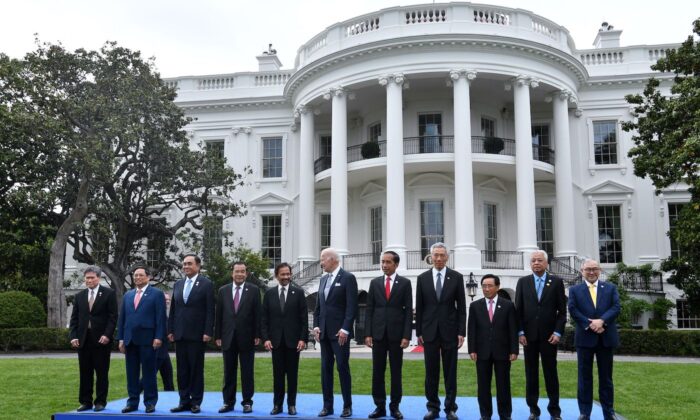 U.S. President Joe Biden (C) and leaders from the Association of Southeast Asian Nations (ASEAN) pose for a group photo on the South Lawn of the White House in Washington, D.C., on May 12, 2022. (Nicholas Kamm/AFP via Getty Images)
Asia & Pacific

Relations between the United States and the 10-nation Association of Southeast Nations (ASEAN) are “critical,” said U.S. President Joe Biden in Washington D.C. on Friday.

Speaking on the final day of a two-day summit, Biden told leaders that “the breadth of our discussions reflect just how vital the Indo-Pacific and ASEAN regions are to the United States of America.”

“A great deal of the history of our world in the next 50 years is going to be written, and the ASEAN countries and our relationship with you is the future in the coming years and decades,” he remarked.

The summit marks the first time in 45 years that ASEAN leaders have gathered in Washington. Former President Barack Obama was the first U.S. leader to host the summit in California back in 2016.

“The ASEAN centrality is the very heart of my administration’s strategy in pursuing the future we all want to see,” Biden said as he reaffirmed the U.S. commitment to maintaining the stability of the Indo-Pacific.

“As we look around the world—all the challenges we’re facing—the ASEAN-U.S. partnership is critical, I think, to meeting the moment we find ourselves in history right now,” he added.

This evening, I welcomed ASEAN leaders to the White House for the first time in history, and reaffirmed the U.S. commitment to Southeast Asia. We discussed the importance of working together to ensure security, prosperity, and respect for human rights for our one billion people. pic.twitter.com/nu6X5Lh2eh

Biden also announced $150 million for initiatives aimed at strengthening U.S.-ASEAN relations, on top of the $100 million that he announced in October last year.

In a joint vision statement, the ASEAN leaders and the United States expressed commitment to establish a “comprehensive strategic partnership” in November.

They called for a “complete denuclearization” of the Korean Peninsula and an immediate cessation of the conflict in Ukraine, without mentioning Russia by name. The leaders also expressed concern for the situation in Burma, also known as Myanmar, following the military coup last year.

ASEAN comprises Brunei, Cambodia, Indonesia, Laos, Malaysia, Burma, the Philippines, Singapore, Thailand, and Vietnam. The Burmese military junta was excluded from the summit, while the Philippines was represented by its foreign minister.

Kurt Campbell, White House coordinator for Indo-Pacific Affairs, said the United States was looking to build engagement with ASEAN leaders on their terms and to understand the ambitions of those nations beyond mere U.S. strategic priorities such as the threat posed by China’s communist regime.

“What most countries in Southeast Asia want is a diversified engagement,” Campbell said on Wednesday. “Steady, stable relations with their big neighbor to the north [China], but also practical, important, enduring ties with the United States.”

The foremost challenge to cementing the ties between the United States and ASEAN, Campbell said, was the perception abroad that Washington’s engagement and priorities would be short-lived due to the fluctuating nature of American politics and, with it, American policy.

“We have to send a signal that the United States will be a steady partner, and that our strategic interests push us and point us into playing a larger role over time,” he said.