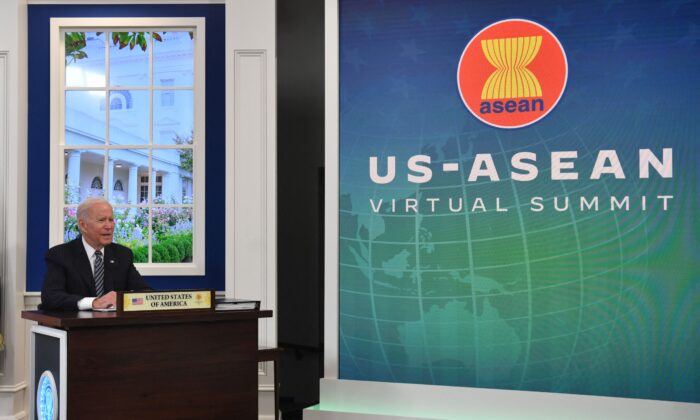 US President Joe Biden participates virtually in the annual ASEAN Summit from the South Court Auditorium of the White House in Washington on Oct. 26, 2021. (Nicholas Kamm/AFP via Getty Images)
International Relations

ASEAN Summit to Demonstrate US ‘Will Be a Steady Partner’ in SE Asia: Top White House Official

President Joe Biden will host national leaders from the Association of Southeast Asian Nations (ASEAN) in Washington this week. It is the latest in an effort to demonstrate that the United States will be a lasting partner to the nations of Southeast Asia, according to comments made by the White House’s chief Asia strategist.

“This is a special summit,” said Kurt Campbell, White House Coordinator for Indo-Pacific Affairs. “We’ve never had a summit between the United States and ASEAN in Washington D.C. before.”

In all, eight of the ten leaders are expected to be in attendance in Washington on May 12 and 13, with only the leaders of Burma (Myanmar) and the Philippines not present.

The summit also precedes Biden’s May 20-24 visit to South Korea and Japan, which will include meetings with the other leaders of the Quadrilateral Security Dialogue, or Quad, a security-focused group also including India, Australia, and Japan.

Speaking to the United States Institute of Peace, a public institution founded by Congress, Campbell said that the Biden administration intended to use the summit to expand engagement with ASEAN as an institution, and to broaden the United States’ interaction with it from a relatively small group of “deeply committed professionals” in the State Department to the “entirety of the U.S. government.” That engagement he said, will begin with a number of initiatives which have yet to be announced.

“Our desire is to introduce these leaders and their teams in a deeply respectful way to the president and to the U.S. team,” Campbell said.

“We will be rolling out a number of initiatives.”

The new initiatives would “go beyond” the military and economic deals generally expected of such a venue, Campbell said, and would seek to restimulate “deep engagement” between all nations involved which, according to Campbell, have “clearly atrophied” in recent years.

To that end, Campbell said that the United States was looking to realistically build engagement with ASEAN member states on their terms, and to understand the desires and ambitions of those nations beyond mere U.S. strategic priorities such as the threat posed by China’s communist regime.

“What most countries in Southeast Asia want is a diversified engagement,” Campbell said. “Steady, stable relations with their big neighbor to the north [China], but also practical, important, enduring ties with the United States.”

“But they’re not content with that either. They want broader engagement with other countries.”

“The enduring challenge is not where we can compete, but whether we can assemble and construct and implement a sustained strategy in southeast Asia,” Campbell said.

“The critique that many would give of the United States in Southeast Asia is that our engagement is episodic at times and that in many important categories our engagement has waned.”

“We have to send a signal that the United States will be a steady partner, and that our strategic interests push us and point us into playing a larger role over time.”

As such, Campbell said that the United States will labor to help transform ASEAN from what is perceived as a largely symbolic organization into a more effective and lasting international institution. Southeast Asia policy, he underscored, was one of the few areas of bipartisan consensus in Washington, and ASEAN should expect to receive the United States’ full engagement.

“We are seeking to engage ASEAN as an institution more than anything else,” Campbell said.