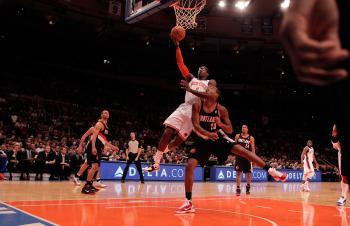 Mimi Li
View profile
Follow
biggersmaller
Print
Asbestos in cleaning materials at Madison Square Garden in New York City was released during maintenance in the arena, causing Tuesday night’s basketball game between the New York Knicks and Orlando Magic to be postponed, the Knicks said on their website before the game.

“Following [Monday] night's Rangers game, during overnight maintenance of Madison Square Garden, which included cleaning asbestos-related materials in the attic above the ceiling, some debris fell into the Arena,” the Knicks announced, saying that they would be delaying the NBA game out of “an abundance of caution.”

Those with tickets to the game are advised to hang on to their stubs, and to visit nyknicks.com for rescheduling and refunding information.

“As the safety of our customers and employees are our top priority, we will not reopen the Garden until we are absolutely assured the Arena is safe,” the Knicks said in a statement.

The Knicks could play their next games at the Nets’ Prudential Center if the cleanup of the asbestos materials took too long, ESPN said, citing a report by the Newark Star-Ledger.

The Knicks have played in the Manhattan sports arena since 1968.