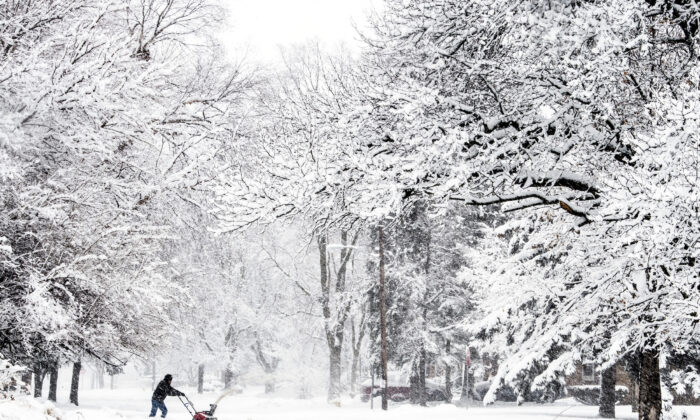 As Winter Storm Moves Across US, Ice Becomes Bigger Concern

CHICAGO—About 350,000 homes and businesses lost power across the United States on Thursday as freezing rain and snow weighed down tree limbs and encrusted power lines, part of a winter storm that caused a deadly tornado in Alabama, dumped more than a foot of snow in parts of the Midwest and brought rare measurable snowfall and hundreds of power outages to parts of Texas.

Storm conditions also caused headaches for travelers across the country as airlines canceled more than 9,000 flights scheduled for Thursday or Friday in the United States.

The highest totals of power outages blamed on icy or downed power lines were concentrated in Tennessee, Arkansas, Texas, and Ohio, but the path of the storm stretched further from the central U.S. into the South and Northeast on Thursday.

Heavy snow was expected from the southern Rockies to northern New England, while forecasters said heavy ice buildup was likely from Pennsylvania to New England through Friday.

Parts of Ohio, New York, and northern New England were expected to see heavy snowfall as the storm moves to the east with 12 to 18 inches of snow possible in some places through Friday, Andrew Orrison, a meteorologist with the National Weather Service in College Park, Maryland, said early Thursday.

However, ice accumulations were expected to be the primary hazard from central and eastern Pennsylvania through the Catskill Mountains of New York to New England, NWS meteorologist Rich Otto said Thursday evening.

Along the warmer side of the storm, strong thunderstorms capable of damaging wind gusts and tornadoes were possible Thursday in parts of Mississippi and Alabama, the Storm Prediction Center said.

In western Alabama, Hale County Emergency Management Director Russell Weeden told WBRC-TV a tornado that hit a rural area Thursday afternoon killed one person, a female he found under rubble, and critically injured three others. A home was heavily damaged, he said.

More than 20 inches of snow was reported in the southern Rockies, while more than a foot of snow fell in areas of Illinois, Indiana, and Michigan.

The flight-tracking service FlightAware.com showed more than 9,000 flights in the U.S. scheduled for Thursday or Friday had been canceled, on top of more than 2,000 cancellations Wednesday as the storm began.

“Unfortunately, we are looking at enough ice accumulations that we will be looking at significant travel impacts,” Orrison said.

At Dallas-Fort Worth International Airport, an American Airlines hub, an estimated 700 customers stayed Wednesday night in its terminals, according to an airport statement. Airport personnel provided pillows, blankets, diapers, and infant formula to the marooned travelers. Airport officials said in the same statement that on Thursday night “we are ready to provide assistance in anticipation of customers who may need to stay in the terminals.”

The Ohio Valley was especially affected Thursday, with 211 flight cancellations at Cincinnati/Northern Kentucky International Airport on Thursday. An airport spokeswoman told the Cincinnati Enquirer that all flights were canceled Thursday except for Delta Air Lines and American Airlines flights before noon.

Nearly all Thursday afternoon and evening flights were canceled at the Louisville Muhammad Ali International Airport, and Friday flights could be as well, spokeswoman Natalie Chaudoin told the Louisville Courier-Journal. UPS suspended some operations Thursday at its Worldport hub at the airport, a rare move.

Almost 300,000 homes and businesses were still without power as night fell Thursday, most of them in Tennessee and Ohio, according to the website poweroutage.us, which tracks utility reports. As night fell Thursday, almost 150,000 Tennessee customers were without power, including about 135,000 in the Memphis area alone—or one-third of the customers of Memphis Light, Gas & Water.

Power restoration could take days, said Gale Carson, the utility’s spokeswoman. “It’s not going to be a quick process,” she said.

Six people were taken to a hospital after a 16-vehicle crash on a Memphis highway. Two were in critical condition when taken to an emergency room after the crash on Austin Peay Highway, the Memphis Fire Department said on Twitter. Four others suffered non-critical injuries.

Trees sagged under the weight of ice in Memphis, resulting in fallen tree limbs and branches. Parked cars had a layer of ice on them and authorities in several communities around the city warned of some cars sliding off slick roadways.

Meantime, almost 70,000 were without power in Ohio, with large percentages of the population in southeastern Ohio in the dark.

In Texas, the return of subfreezing weather brought heightened anxiety nearly a year after February 2021’s catastrophic freeze that buckled the state’s power grid for days, leading to hundreds of deaths in one of the worst blackouts in U.S. history.

Facing a new test of Texas’ grid, Republican Gov. Greg Abbott said it was holding up and on track to have more than enough power to get through the storm. Texas had about 70,000 outages by Thursday morning, nowhere close to the 4 million outages reported in 2021. About half had their power restored by evening.

Abbott and local officials said Thursday’s outages were due to high winds or icy and downed transmission lines, not grid failures.

In Dallas, where snow rarely accumulates, the overnight mix of snow and freezing rain had hardened Thursday afternoon into an icy slick that made roads perilous.

South Bend, Indiana, reported a record snowfall for the date on Wednesday with 11.2 inches, eclipsing the previous record of 8 inches set on the date in 1908, said Hannah Carpenter, a meteorologist with the National Weather Service’s office in Syracuse, Indiana.

Once the storm pushes through, she said temperatures will see a big drop, with Friday’s highs mostly in the upper teens followed by lows in the single digits in northern Indiana, along with bone-chilling wind chills.

The frigid temperatures settled into areas after the snowy weather, with Kansas residents awakening to dangerous wind chills of around 15 below zero. In New Mexico, schools and nonessential government services were closed in some areas Thursday because of icy and snow-packed roads.

The disruptive storm began Tuesday and moved across the central U.S. on Wednesday’s Groundhog Day, the same day the famed groundhog Punxsutawney Phil predicted six more weeks of winter. The storm came on the heels of a nor’easter last weekend that brought blizzard conditions to many parts of the East Coast.