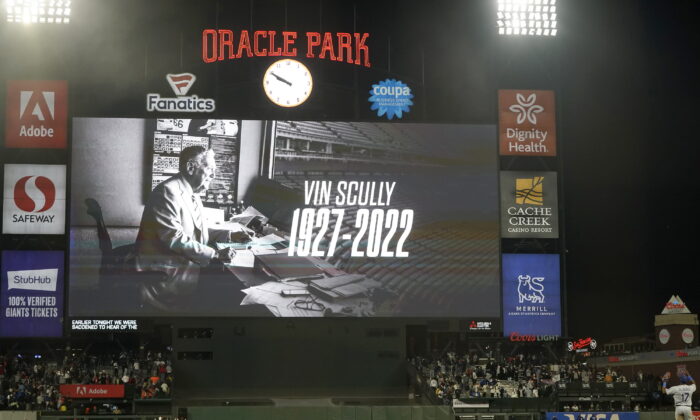 The Giants played a tribute on their video board after the final out at Oracle Park, the stadium where in October 2016 Scully broadcast the final game of his 67 seasons with the Dodgers. He died Tuesday at age 94.

“It was first-class by the Giants,” Dodgers manager Dave Roberts said. “It’s sort of an emotional roller-coaster and it was kind of a little subdued.”

Los Angeles won its six straight game over the Giants and improved the major leagues’ best record to 70–33.

Trea Turner and Austin Barnes added RBIs for Los Angeles, which has won six of its last seven games.

Joey Bart homered for San Francisco, which fell to 3–10 since the All-Star break. David Villar and Luis González also drove in runs for the Giants.

Ahead of Tuesday’s trade deadline, the Dodgers acquired OF Joey Gallo from the New York Yankees for minor league RHP Clayton Beeter.

Run On The Move

The Giants assigned RHP Angel Rondón outright to Triple-A Sacramento and recalled LHP Alex Young, while RHP Tobias Myers was claimed off waivers by the Chicago White Sox and RHP Kervin Castro was claimed by the Cubs.

OF Joc Pederson and SS Thairo Estrada are both recovering well from concussions and expected to return when first eligible to come off the 7-day concussion injured list on Saturday and Monday, respectively.