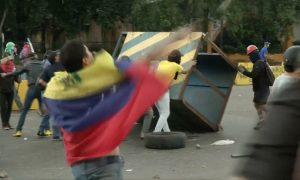 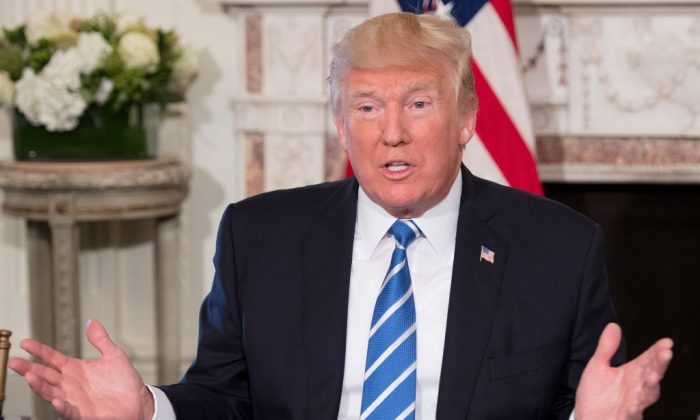 President Donald Trump indicated that he will not rule out military intervention as an option to address the growing instability in Venezuela.

Venezuela slid toward a more volatile stage of unrest in recent days, with anti-government forces looting weapons from a military base after a new socialist legislative body usurped the authority of the opposition-controlled Congress.

“The people are suffering and they are dying. We have many options for Venezuela including a possible military option if necessary,” Trump said.

The White House said Venezuelan President Nicolás Maduro requested a phone call with Trump on Friday, Aug. 11, which the White House appeared to spurn, saying in a statement that Trump would gladly speak to Venezuela’s socialist leader when democracy was restored in that country.

Venezuela was one of the wealthiest countries in South America before Hugo Chávez instituted socialist reforms that devastated the country’s economy. Maduro took over from Chávez in 2013 and continued his policies with the country sliding into mass poverty and widespread hunger.

Venezuelan authorities have long said U.S. officials were planning an invasion. A former military general told Reuters earlier this year that some anti-aircraft missiles had been placed along the country’s coast for precisely that eventuality.

In Washington, the Pentagon said the U.S. military was ready to support efforts to protect U.S. citizens and America’s national interests, but that insinuations by Caracas of a planned U.S. invasion were “baseless.”

Trump’s suggestion of possible military action came in a week when he had repeatedly threatened a military response if North Korea threatens the United States or its allies.

Asked if U.S. forces would lead an operation in Venezuela, Trump declined to provide details. “We don’t talk about it but a military operation—a military option—is certainly something that we could pursue,” he said.

The U.S. military has not directly intervened in the region since a 1994-1995 operation that aimed to remove from Haiti a military government installed after a 1991 coup.

The United States sanctioned Maduro and other Venezuelan officials in July after Maduro established a constituent Assembly run by his United Socialist Party loyalists and cracked down on opposition figures. The Assembly’s election drew international condemnation and critics have said it removed any remaining checks on Maduro’s power.

Washington has not placed sanctions on the OPEC member’s oil industry, which supplies America with about 740,000 barrels per day of oil.

Venezuela possesses a stockpile of 5,000 Russian-made MANPADS surface-to-air weapons, according to military documents reviewed by Reuters. It has the largest known cache of the weapons in Latin America, posing a concern for U.S. officials during the country’s mounting turmoil.

The United Nations Security Council was briefed behind closed doors on Venezuela in May at the request of the United States. At the time, U.S. Ambassador Nikki Haley said Washington was just trying to raise awareness of the situation and was not seeking any action by the 15-member Security Council.