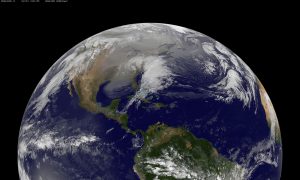 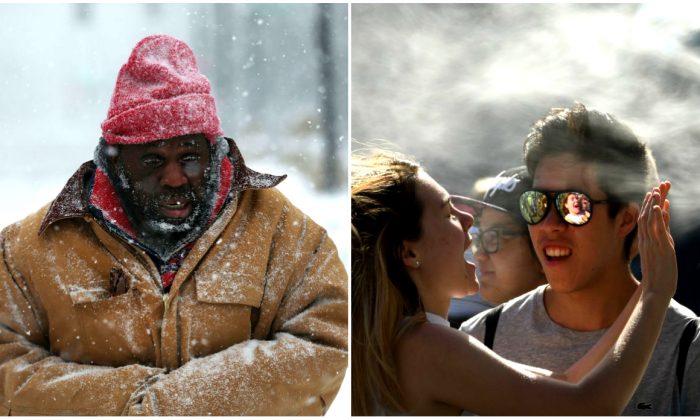 A homeless man (L) walks through the snowy streets of Boston, United States, on Jan. 4, 2018. (Spencer Platt/Getty Images) and a spectator (R) cools off at the Australian Open tennis competition in Melbourne, Australia, on Jan. 16, 2018. (William West/AFP/Getty Images)
Australia

North America’s polar vortex has caused temperatures in parts of the U.S. mid-west to plummet to record low Siberia-like temperatures. On Jan. 29, Chicago’s overnight minimum dropped to minus 54 degrees Celsius (minus 48.9 degrees Fahrenheit), which city authorities warned to be cold enough for anyone to “freeze to death in minutes.”

In stark contrast, Australia is experiencing its hottest summer on modern historic records, according to national median temperates. Although there is no such thing as an anti-polar vortex, a combination of high air pressure and a late monsoon season in tropical North Queensland has created unprecedented heat, according to the Australian Bureau of Meteorology (BOM).

“The main contributor to this heat was a persistent high pressure system in the Tasman Sea, which was blocking any cold fronts and cooler air from impacting the south of the country,” BOM Senior Climatologist Dr. Andrew Watkins said in a public statement. “At the same time, we had a delayed onset to the monsoon in the north of the country that meant we weren’t seeing cooler, moist air being injected from the north.”

#ElNiño is on hold, but February–April is likely to be warmer than average for the time of year across Australia. Rainfall is likely to be below average in many parts, particularly for Western Australia. More #BOMOutlook details at https://t.co/2jrPpiMX0U. pic.twitter.com/YrLaihJIyQ

The remarks came as BOM released its latest climate summary, showing that for the first time in any year, the mean temperature for January averaged more than 30 degrees Celsius (86 degrees Fahrenheit).

“We saw heatwave conditions affect large parts of the country through most of the month, with records broken for both duration and also individual daily extremes,” he said. “The warming trend which has seen Australian temperatures increase by more than 1 degree in the last 100 years also contributed to the unusually warm conditions.”

BOM reported that rainfall has been below average for the southern half of the country, while the monsoon weather pattern in the northeast brought significant rainfall totals to Far North Queensland late in January.

KAP getting results for Dams in Qld.Let’s build more Dams in the NorthTime to vote #KAPKatter's Australian Party

South Australia has experienced its driest January since 2013, with BOM’s Adelaide city site recording a zero rainfall monthly total for the first time since 1957. Adelaide had one of the city’s warmest Januarys on record, with maximum temperatures the hottest for at least 10 years.

Victoria received less than 20 per cent of its January average rainfall and had one of the 10 driest Januarys on record. Melbourne was exceptionally hot, with some parts of the ‘Batmania’ city recording their highest ever January temperatures. It was also the warmest January on record for mean, maximum, and minimum temperatures.

Here’s some amazing imagery from the Himawari-8 Satellite of the Jericho fire in Gippsland yesterday. The smoke plume reached over 7km high spreading smoke across Bass Strait. Images are taken every minute…a live feed of the sky from 36,000km high! https://t.co/gpZ0D8Vtni pic.twitter.com/yMmsMH1ptl

In Queensland, a monsoon weather system brought heavy rainfall to the state’s far north late in the month. Brisbane was very hot, while rainfall was very low in the River City at about 20 percent of the January average.

New South Wales experienced one of the driest Januarys on record in the Premier State’s northeast. Mean, maximum, and minimum temperatures for January have been the warmest on record. Sydney had one of its warmest Januarys on record, with just average rainfall recorded in the Emerald City.

The Australian Capital Territory had rainfall close to average and its warmest January on record. BOM’s Canberra International Airport site had a record four days with temperatures soaring above 40 degrees Celsius (104 degrees Fahrenheit).

The Northern Territory experienced a delayed monsoon season, causing the territory to receive less than half its average January rainfall. Darwin had below-average rainfall and also one of its warmest Januarys on record. The territory also recorded its warmest January for mean, maximum, and minimum temperatures.

Tasmania had the driest January on record and also one of its warmest Januarys for mean, minimum and maximum temperatures. The Natural State’s capital of Hobart experienced its driest and warmest month on record too.

Western Australia had below rainfall average and the driest January since 2005. Although it was one of the warmest Januarys on record, the Golden State bucked the national trend by recording cooler than average temperatures in parts of the West Coast and southwest. Rainfall was about average in Perth, and the month was its coolest in more than a decade.

Watch our latest Weather Update on YouTube at re: Tropical #CycloneRiley off the #WA coast, & the developing tropical low in the Gulf. Video current at 12 pm AEST Saturday 26 Jan. 2019. Check warnings on our website; follow advice from emergency services. pic.twitter.com/K4DzTyokaA