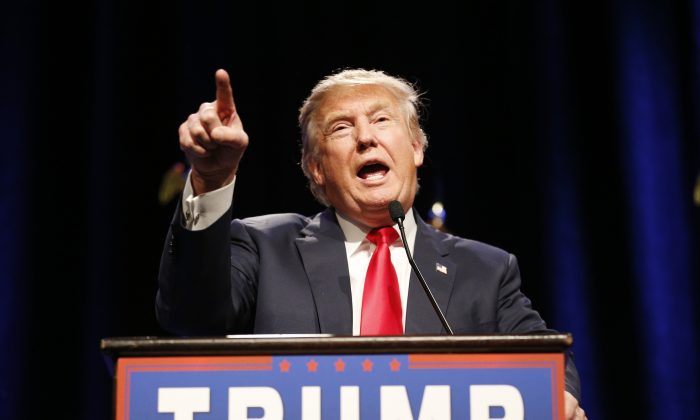 A protester being removed from a Donald Trump speech in Las Vegas was the subject of the crowd’s wrath as he was being dragged out.

Several protesters, including a woman, repeatedly heckled the Republican frontrunner as he spoke at the Westgate Casino in Vegas, but were all quickly silenced by teams of security.

But a recording filmed as one man was dragged out captured a Trump supporter in the crowd using a Nazi salute as he shouted “Seig heil.”

Another person in the crowd yelled: “Light the [expletive] on fire!” while another shouted: “Get outta here, scumbags!”

The protesters were reportedly activists with the Black Lives Matter group.

The protester being yelled at was identified as Ender Austin III, who spoke to Buzzfeed after being thrown out of the rally.

“We came to the rally tonight to make sure issues that matter to us were heard. They immediately used physical force. I absolutely was being disruptive, but as I was making statements I felt hands grabbing on me,” he said.

“What concerns me is that people were yelling racial epithets and hateful things. I heard the N-word a couple of times. If we really want to make America great again, then we have to come together. We have to promote a positive agenda that’s not going to exclude or promote racial hate towards anyone.”

Trump joked as the protesters were taken away, saying at one point: “I staged that!” He said it’s the only way to get media to turn up and show the true crowd size. When another protester was taken away, he stopped only to ask: “Do I hear some noise over there? Yes? Bye bye!”

The Daily Mail noted that the speech took place at one of the lower-class casinos, with Trump telling people at the beginning of the 63-minute speech that “The people in this country are absolutely incredible people and I am honored to be here with you tonight.”

“We’re going to take our country back,” he added.

Trump later went on a riff about illegal immigration, inviting members of “remembrance families” that lost loved ones at the hands of “people who aren’t supposed to be here.”

Jamiel Shaw’s son, for instance, was shot to death in 2008 by an illegal immigrant. He told the crowd that Trump “feels what we feel.”

But some of protesters targeted Trump’s stance on immigration, such as labor organizer Jose Macias.

“He was attacking undocumented families. We hear so much hate directed towards our community. My family is Mexican and I hear him saying we’re rapists and that we come here to steal and we don’t work. That’s really offensive. My family are hardworking people who want to give back to this country,” Macias told Think Progress.

“I wanted to be here and speak out because a lot of people don’t have a voice, or they are scared to do it. If we don’t stand up now, he’s just going to keep attacking our families. We have to stand up and fight back.”

Supporters at the rally said they believe in Trump.

“Some people don’t like the guy, but there are a lot more of us who are comfortable with him, and we’re starting not to care who knows it.”