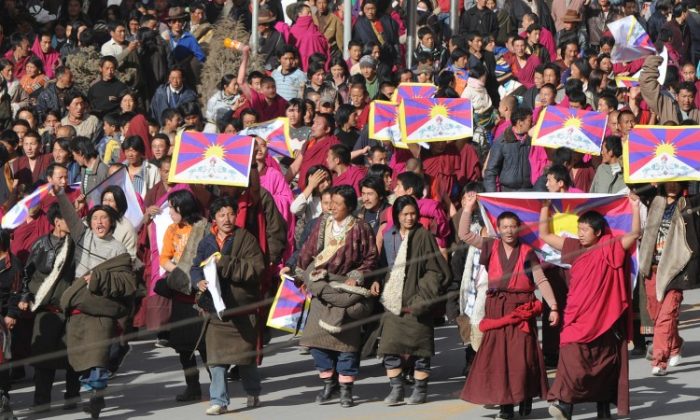 In this picture taken on March 14, 2008, protesters led by Tibetan Buddhist monks shout slogans and carry the Tibetan national flag near Labrang monastery in Gansu Province. Another Tibetan set themselves on fire earlier this week near Labrang in a protest against Chinese rule. (Mark Ralson/AFP/Getty Images)
China

A Tibetan man set himself on fire on Wednesday, meaning that eight Tibetans have set themselves on fire in the past month to protest against repression at the hands of Chinese Communist authorities, and now Tibet’s leaders-in-exile are making a plea to the international community to do something about it.

A grim series of images published on the International Campaign for Tibet’s website shows Dorje Rinchen running down the street on fire near Labrang monastery in central Gansu Province, before collapsing. He later died of his injuries. It was the second incident of its kind outside the monastery in two days.

Chinese soldiers got into a standoff with residents of the town who were trying to protect his body to take back to the monastery. Dorje was in his 50s and sold bread at the monastery.

The exiled Central Tibetan Administration, which recently told Tibetans living in China not to self-immolate, said on Wednesday that Chinese repression is driving people to set themselves on fire. The Tibetan Parliament added that it expresses a “deep sadness” over the self-immolations.

Since February 2009, 58 Tibetans have set themselves on fire, with most dying of their injuries, and the rate of self-immolations has only increased.

In a statement, the Administration said that there is a “systematic repression of their freedom of religion and human rights, destruction of Tibetan language, culture and environment, and assimilation of Tibetan nationality through induced massive influx of Chinese population into Tibet.”

The Chinese communist regime “solely responsible for the continuing self-immolations by Tibetans in Tibet as it refuses to address the underlying the causes of the problem, and instead intensifies measures to suppress the Tibetan people,” the exiles said.

The group also issued a warning to the Chinese regime, saying that if it does not back down on cracking down on Tibetan areas, then the situation will most definitely deteriorate even more.

Other governments, it continued, should also pressure Chinese authorities into making meaningful changes.

Local sources told the Tibet Post International that Dorje’s body was taken by Tibetans living in the area to his hometown.

The incident prompted local Chinese officials to send in a group of armed security forces to Sayue township, near the monastery, according to the publication. They also apparently cut Internet and telecommunications lines in the area after the self-immolation, a phenomenon that has been commonly reported in previous incidents.