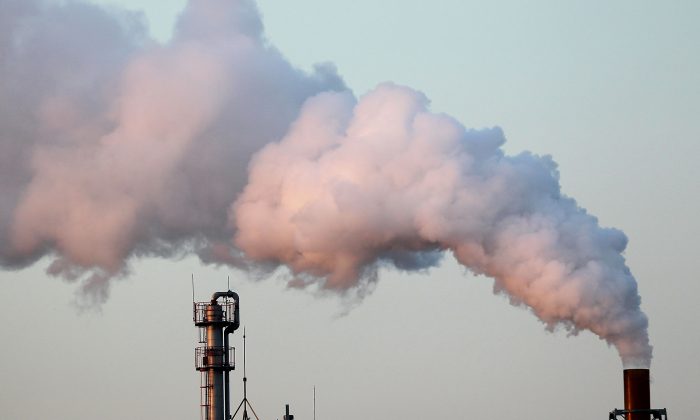 The United States, like many other countries, has been participating in negotiations in the lead-up to the United Nations’ conference on climate change in Paris. The goal is to craft a policy framework that is going to engage all countries in combating global warming and establish institutions that can continue to spur more ambitious efforts over time.

The U.S. pledge, officially called the Intended Nationally Determined Contribution (INDC), details the progress made to date: emissions are on a downward trajectory, but reductions need to accelerate in order to realize its 2025 pledge.

The same document highlights some of the specific policies the U.S. is implementing to do this, including fuel economy standards that will double the efficiency of cars sold in America between 2009-2025, power sector carbon regulations that will cut CO2 emissions 32 percent below the 2005 level by 2030, ambitious appliance efficiency standards and potentially regulation of methane emissions from oil and gas operations.

There are two key challenges in the international negotiations. First, the international community needs to develop and implement a meaningful transparency-and-review mechanism to verify countries are meeting their voluntary pledges.

President Obama personally negotiated language on transparency during the 2009 Copenhagen negotiations, reflecting the importance of this issue to the United States. The United States advocated for a more sophisticated approach to transparency, in part, because of the poor track record of review and policy surveillance under the existing U.N. Framework Convention on Climate Change (UNFCCC).

A country’s pledge to be transparent publicly signals seriousness in taking on climate change and enhances the credibility of its commitment. Progressive political leaders who advance ambitious domestic emission mitigation policies would benefit from this transparency—it would highlight their leadership.

Such transparency also increases the costs to political leaders who fail to deliver on commitments. It can publicly subject this failure to domestic stakeholder pressure and peer pressure from other leaders.

The ability to review the outcomes for a mitigation program can demonstrate whether a country undertook a good-faith effort to deliver on its pledged commitment and build trust among those participating in an agreement. An effective system to collect, analyze and disseminate information about countries’ pledges can also facilitate subsequent negotiations.

Some countries oppose a robust system of review on the grounds that such efforts would violate their sovereignty. Yet, these countries willingly participate in regular policy surveillance conducted through the International Monetary Fund’s Article 4 consultations and the World Trade Organization’s Trade Policy Review Mechanism.

Indeed, these two institutions undertake expert review—through the collection and analysis of data and public policies—that feeds into a peer-review process that is substantially more rigorous, informative and credible than the status quo climate policy surveillance.

Transparency is critical to the emerging “pledge and review” approach to international climate policy architecture.

Put simply, the current approach to climate policy asks countries to take a step forward in cutting their emissions. As countries do so, they will look among their peers, their trade partners and their regional neighbors, to see if they are all moving forward together. Once they see that all are making progress in lowering their emissions, they will be more confident in taking on more ambitious subsequent efforts in tackling climate change and will be able to build domestic support for these efforts.

This is especially important in countries like the United States, where domestic concerns about adverse competitiveness pressures—for example, if U.S. manufacturing faces a carbon price but their foreign competitors do not—have served to block progress on climate policy. A well-functioning emissions reporting and verification regime can serve to counter concerns over competitiveness.

The second challenge facing American negotiators in Paris lies with the goal of limiting warming to no more than two degrees Celsius.

Some stakeholders have claimed that the current round of pledges are insufficient to meet this goal. Underlying such claims are a number of assumptions, some of which are very strong while others are more opaque, including post-2030 emissions and related mitigation policies, climate sensitivity, risk attitudes and other factors.

Regardless, there is a real risk that pressuring countries to do more to mitigate emissions in this round of talks will distract from the necessary work of building a durable framework for reporting, monitoring and verifying pledges.

Countries have committed to lowering domestic emissions in light of their own national circumstances. Launching contentious debates about who can do what additional mitigation efforts ignores the real constraints of domestic politics. Moreover, it could crowd out time and effort on the important task of building the institutional infrastructure for pledge and review, and especially transparency.

As a result, success in Paris should not reflect some “counting the tons” exercise motivated by the two degrees Celsius goal. Success should be measured by the extent to which the international community can agree on a robust institutional infrastructure for pledging and transparency with review that can enable learning and build trust among countries.

This would provide the durable foundation for the long-term climate policy necessary to limit warming and mitigate the risks posed by climate change.

Joseph Aldy is an associate professor of public policy at Harvard University. This article was previously published on TheConversation.com