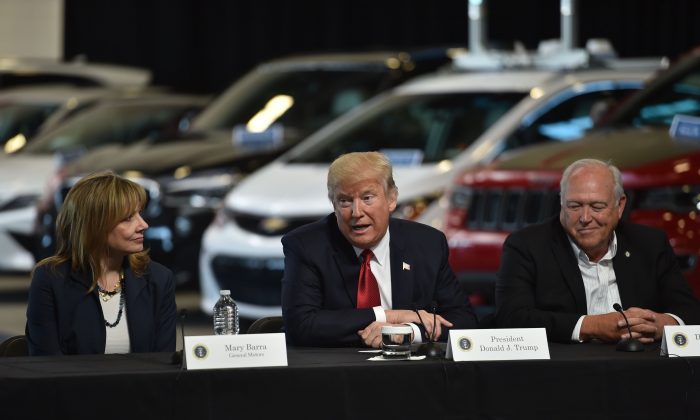 As the US Counters China’s Industrial War, Transactions Are Key The West needs to understand that to fight China in an industrial war, you had better know what you are doing. This is a completely different opponent altogether. There are no Queensberry rules here. That means no gloves, no referee to stop the fight, no throwing in the towel, and no medical staff to tend to your wounds.

The aim of industrial warfare is not to win according to a set of rules, or to win a game of some kind. It is designed specifically for one thing: to put the opponent out of business. And it has been working very well for the last three decades that China has been using it—the effects of which have depleted American manufacturing, sapped natural resources out of Australia, and allowed the Chinese regime’s economic colonization of Latin America and Africa.

Industrial war is the fight for manufacturing, and this extends to the fight for natural resources, shipping channels, intellectual property, skilled employees, and a long list of other assets.

The United States is now entering this fight, after allowing the Chinese Communist Party (CCP) relatively free reign for decades. President Donald Trump may place $60 billion in tariffs on Chinese goods, and this may help establish a set of enforceable rules in this domain. But the CCP is unlikely to agree without testing the boundaries of the ring.

The key word here is “probability,” as things can be uncertain even when the battle may look as if it has been won. A single unlucky strike can render your entire effort useless.

In a kinetic war, the type most nations are used to fighting, the main weapon looks like a projectile: a bullet, missile, bomb, or arrow. During the war, you fire as many as you can against an opponent until you defeat their army, forcing them to yield to your terms of surrender.

In industrial warfare, the projectile looks like a transaction. The more transactions you make, the better your chances of winning the conflict.

There are hundreds of attack and defense techniques in industrial warfare, with countless combinations for forming actions and responses. This creates massive potential to build complex strategies.

A transaction is more complex than it immediately appears, however, and these apply to the seven methods of securing a transaction. These are price, delivery, quality, aftermarket, customers, shareholders, and employees.

When all of these seven elements of a transaction are firing on all cylinders, the business senses are sharp, and the machine that drives it is well-oiled, in tune, and ready for growth. After transactional growth has been achieved at home, the industrial war fighter will be looking for growth abroad—in other lands and among the economies of other nations. That’s when it becomes very serious.

In order to secure transactions, we need two simple directions: one that moves into the territory of a competitor, and another that defends our territory.

The defensive system in industrial warfare is designed to save money and keep it inside the demarcation battle line—which means in your own country, or, in China’s case, within China.

Video: How Industrial warfare has occurred between USA and China

The attack system is designed specifically to invade a competitor’s territory and to take their transactions. If this is taken to an extreme—as the Chinese regime has been doing—entire geographies can be depleted of their industry, ecosystems starved of transactions, and the local populations depleted of their livelihoods, leaving devastation in its wake.

The state of the current battlefield is a big part of why Trump was elected. The United States has been on the receiving end of Chinese industrial warfare for more than three decades, and the results are showing in cities like Detroit where industrial depletion has rendered the working population redundant. This Detroit effect is spreading right across the nation as the waters become more shallow and competition in everything becomes so endemic that people simply cannot make a living anymore.

Under the effects of an economy depleted by foreign industrial war, like a starved body, the local economy begins to cannibalize itself, and the targeted country will be forced to sell off its resources and assets to survive.

Not understanding industrial warfare has a massive effect on a population, will make the voter base change their approach to politics, and will suffocate the civil service, which is run by taxpayers. If its effects are not curbed, the instability resulting from economic depletion through industrial warfare can even lead to civil war.

While it is technically nonviolent, the effects of industrial warfare can be just as devastating as conventional combat. Thus, it is vital that the United States understands the nature of the war in which it has been engaged, and which the Trump administration has begun to counter.

Amar Manzoor is author of the book “The Art of Industrial Warfare,” and founder of the 7Tao industrial warfare system.