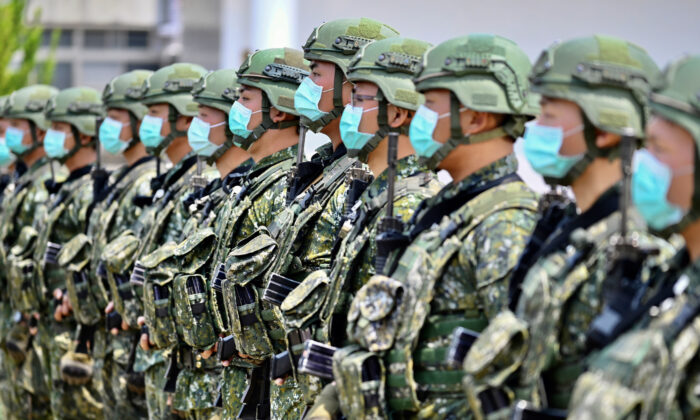 Soldiers wearing face masks amid the COVID-19 coronavirus pandemic listen to an address by Taiwan President Tsai Ing-wen during her visit to a military base in Tainan, southern Taiwan, on April 9, 2020. (Sam Yeh/AFP/Getty Images/TNS)
China

As Tensions Simmer Over Taiwan, Global Chip Supply Hangs in the Balance

By Riley Beggin
From The Detroit News

Tensions between China and Taiwan are escalating, and confusion sparked by President Joe Biden’s recent pledge to defend Taiwan has sent his administration scrambling to assure the international community that’s not necessarily the case.

It’s the latest twist in a longstanding drama that could upend political and economic stability in the region and reframe China’s power in the world. But experts warn there could be another casualty in the case of war in the Taiwan Strait: The remaining global supply of semiconductor chips.

After a year of shortages, the prospect of yet another interruption to the chip supply likely is enough to make Detroit’s automakers and their foreign rivals shudder. Taiwan produces 65 percent of all chips globally and is home to the largest semiconductor company in the world, Taiwan Semiconductor Manufacturing Company.

That has created a supply chain chokepoint already on display amid a pandemic-induced shortage, which has cost the auto industry more than $210 billion in lost revenues and 7.7 million vehicles of lost production worldwide in 2021, according to consulting firm AlixPartners LLP.

If U.S. policymakers don’t adequately walk the diplomatic tightrope between Taiwan and China, observers warn that shortage could become exacerbated to disastrous ends.

“War in the Taiwan Strait would definitely shut down semiconductor manufacturing for some period of time in Taiwan,” said Shelley Rigger, a political scientist at Davidson College in North Carolina. “Global industry would pay a humungous price for any kind of PRC (People’s Republic of China) military action against Taiwan. … We all need to avoid that outcome.”

Officials are attempting to ease concerns after Biden told CNN’s Anderson Cooper late last month that the United States would come to Taiwan’s defense if China attacks rather than simply support Taiwan’s self-defense, countering a decades-old policy of “strategic ambiguity.” White House aides quickly clarified there has been no change in policy, and U.S. Secretary of State Antony Blinken repeated the message to his Chinese counterpart on Sunday.

“There is no change in our policy,” Blinken told CNN Sunday. “We’ve had a longstanding commitment … to make sure that Taiwan has the means to defend itself, and we stand by that.”

However, some lawmakers of both parties are calling for the administration to actually make that policy change in order to deter China from invading. And the mixed signals have Chinese leaders on edge.

The new questions over U.S. policy come as the fragile détente between China and Taiwan continues to unravel.

Earlier this year, Taiwan’s defense minister warned that military tensions between the island and mainland are at their highest in 40 years and said China could launch a full invasion by 2025. The Chinese increasingly have been sending warplanes into the island’s defense zone, testing Taiwan’s military.

Officials in Beijing are beginning to fear that the United States sees Taiwan not just as an important trading partner, but “a strategic asset that can be used to weaken or undercut China,” Rigger said. And even though the United States insists it hasn’t changed its policy toward Taiwan, “the Chinese don’t believe it.”

“What that sounds like in China is that the U.S. is actively working to permanently divide Taiwan from mainland China. And that’s the thing that they just can’t accept,” Rigger said.

The rift between China and Taiwan dates back to 1949. When the Chinese civil war ended, the losing side fled to the island of Taiwan while the winners set up a communist government on the mainland.

The two have been governed separately ever since, and Taiwan’s then-authoritarian government eventually transitioned to a democracy. Taiwan hasn’t formally declared independence but insists it is not part of any other nation, while China regards the island as a rogue territory that must eventually be reunited—by force if necessary—with the rest of the country.

That’s put the United States in a complicated diplomatic position as it attempts to retain ties with both governments. The United States formally recognized China’s communist government in 1979 to capitalize on strategic and economic opportunities in the region.

That required the United States to stop recognizing Taiwan’s government. Today, it only has official diplomatic relations with the communist government out of Beijing.

But Taiwan remains a close ally in the region. And federal policymakers have long fostered a strong unofficial relationship with Taiwanese leaders—including selling them weapons that can be used for self-defense in the case of an attack from mainland China.

The United States’ official policy toward Taiwan also says the country can provide “defense services” to help the island remain capable of defending itself, but it doesn’t say whether the United States would intervene or support Taiwan if they end up in a war with China.

This so-called “strategic ambiguity” has been the foundation of decades of U.S. foreign relations with China and Taiwan. And for nearly as long as it has existed, it’s been a political minefield requiring diplomatic tinkering to maintain the status quo.

The threat of war in the Taiwan Strait is a potent reminder for both businesses and policymakers to build up chip supplies in other parts of the world, experts say.

Taiwan is home to 65 percent of all semiconductor foundries, according to consulting firm AlixPartners. The second-highest share, 18 percent, is in South Korea, while China has 6 percent of global foundries—both of which would also likely be impacted by war in the area. All other countries host just 11 percent of the world’s chip producers.

Policymakers of both parties in Washington are concerned about competing with China for economic supremacy, including in the race to lead in the auto industry’s electric future. Many are already concerned that China could hamstring U.S. manufacturers if it proved politically advantageous, and gaining control of Taiwan could strengthen that leverage.

“It’s another log on the fire that’s forcing us to confront new realities. Our calculation was that China would increasingly integrate into the global economy, play by international standard rules, and everyone would live happily ever after,” said Michael Dunne, CEO of Hong Kong-based advisory firm ZoZo Go LLC.

“That’s not the case, and now we’re having a wake-up call.”

Chip companies are responding to that realization, said Anne Hoecker, a partner at Bain & Co. who leads the firm’s semiconductor group. TSMC is building a new plant in Phoenix, Intel has announced billions in new investments in Europe and the United States, and Abu-Dhabi-based GlobalFoundries recently filed for an IPO in the United States.

“All of the manufacturers are putting big capital plans in place to help diversify the footprint of where semiconductors are manufactured. That, unfortunately, is going to take time, so you can’t change the capacity in semiconductors overnight,” she said. “It’s one of the things that makes this semiconductor shortage concerning and, honestly, so frustrating for so many companies.”

Further instability could be particularly worrisome for those in the auto industry, she said, because the “mature” chips that are used in vehicles are a small portion of all chips made and are usually less lucrative than the chips used in consumer electronics.

But for the time being, the economies of Taiwan, China and the United States are so intertwined that conflict would be damaging for everyone, Hoecker said: “It’s a tightrope on both sides.”

That interdependence is one of the reasons most foreign policy experts say that a direct Chinese attack on Taiwan remains unlikely in the short term—China itself would be hurt politically and economically by war.

But for the United States, Dunne said, economic stress made worse by a semiconductor shortage could be a factor in shifting its policy to counter Chinese aggression in the case of an attack.

“It’s like the new oil. It’s crucial. It lubricates the entire global economy,” he said. “So any threat to the supply of those chips would be, arguably, a threat to national security.”