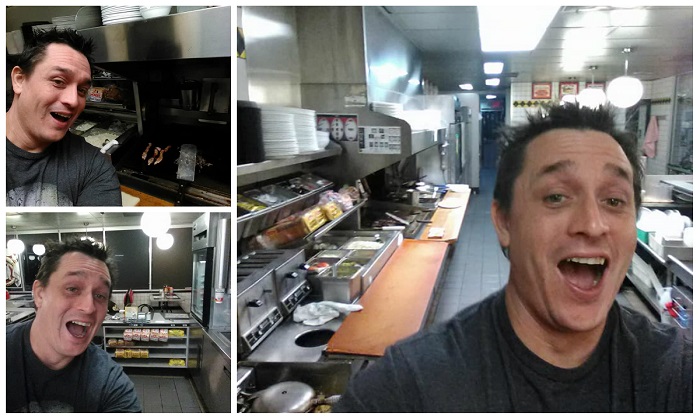 Some of the photos of South Carolina man Alex Bowen in the Waffle House kitchen that have gone viral. (Courtesy of Alex Bowen)
US News

As Staff Sleep, Customer Cooks Himself up a Storm at Waffle House

Alex Bowen was a hungry man and went for something to eat at his local Waffle House during the early hours of Thursday morning.

When the father-of-one got to the West Columbia eatery, not far from his home, it was void of customers. He was also unable to find a staff member and he waited ten minutes at the register for service.

“I walked back outside to look for employees,” Bowen told WIS-TV. “No one in sight.”

So he did what any former-military man would do, he improvised.

“Walked back in and waited a few more minutes and then it was go time,” Bowen said with a laugh.

It wasn’t clear when he saw the sleeping staff member but he went about making something to eat, taking pictures as he went and posted them to his Facebook account.

“Couldn’t sleep so I went to waffle house….guess what…everyone on shift was asleep,” he wrote along with the images.

There were shots of him frying bacon, stacking pickles on bread.

His very funny shots subsequently went viral and his Facebook page has been flooded with comments.

“You might have a future as a secret shopper!” wrote one person.

“Alex Bowen your face in your selfies are just hilarious. My friend from St. Louis read the write up from the news and said you are his hero and you should run for office,” wrote another.

In his interview with WIS-TV, Bowen also admitted he was under the influence of alcohol.

“I give all the credit to my old friend vodka,” Bowen said. “I wouldn’t normally have done that.”

Bowen’s antics and his images have also attracted plenty of media attention.

Having made something to eat, Bowen left without paying but later returned that day and paid for what he ate. He posted a photo of him making the payment to a Waffle House employee on his Facebook page.

According to WIS-TV, a spokesperson for the eatery said the sleeping employee has been suspended for a week but they can see the funny side of it all.

“… Alex has some cooking skills, and we’d like to talk to him about a job since we may have something for him,” said part of a statement put out by Waffle House.