As Small Dairy Farms Disappear, This One Thrives in Otisville, New York 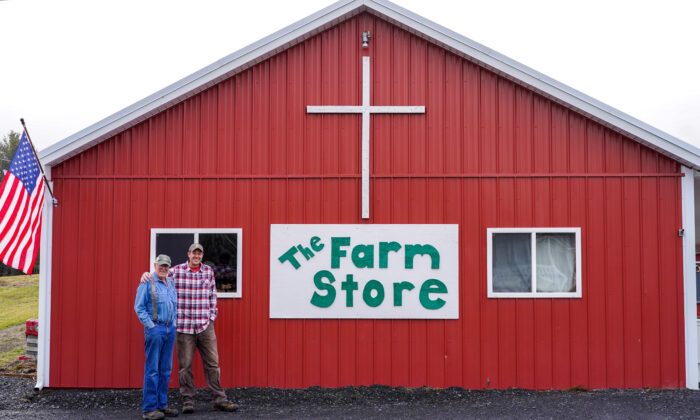 When Rick Vreeland and his wife sold their 2,000-cow dairy farm in Slate Hill, New York, in the early 2000s, he was at a loss about what to do next—so he prayed.

His prayer led to a small dairy farm in Otisville, New York, where over a thousand residents near and far now visit to get close to farm animals, buy raw milk products, and sometimes have a little faith chat.

It is known as the most visitor-friendly farm in the area—its door is never closed, and all are welcome.

And it is a profitable 35-cow dairy farm at a time when numerous others are going down financially.

His younger son also came back to work with him years ago. Their relationship—which had been tense since the young Vreeland left the big farm for a different career—mended over time.

“This farm is such a pleasure. It exists through God’s grace,” Rick Vreeland told The Epoch Times on his farm on Jan. 13. “It is not our story. It is God’s story.”

Not long after September 2001, Rick and Julie Vreeland sold their 6,000-acre farm in Slate Hill after working on it for 30 years.

Neither of their two sons wanted to farm.

It was hard work. They would simultaneously milk around 2,000 cows throughout the day and tend to 5,500 acres of corn and hay. A crew of 36 employees worked under them.

Chris Vreeland, the younger son who had earned an agricultural business degree intending to farm, changed his mind and left; his brother soon followed suit.

“I was young, inexperienced, and probably immature,” Chris Vreeland told The Epoch Times. “As a young kid with different ideals, I was not enjoying this at all. I really didn’t want to keep doing this.”

After the couple sold the big farm, they prayed for the future.

“I just said: ‘God, what do you want us to do? I’m just a farmer.’ And Julie said, ‘I just want to help kids.’ So we looked at each other and said, ‘Let’s get some cows and invite kids,’” Rick Vreeland said.

They got permission from Rick Vreeland’s father to use the family barn in Otisville, bought nine Jersey cows, and started the Freedom Hill Farm.

When the first calf was born, local children came on bicycles and skateboards to see it with balloons in their hands.

Instead of selling to a co-op as they did with the big farm, they directly sold the fresh, raw milk from grass-fed Jersey cows to customers.

They operated an honor system, where customers wrote orders on a ticket and dropped the payment in a money box.

In the beginning, about 20 people bought the milk. Today, around a thousand customers visit the farm for fresh milk, Rick Vreeland said.

“As soon as we started that, God opened the floodgates.”

While doing well with raw milk, they started to produce value-added products, such as yogurt and kefir.

Meanwhile, Chris Vreeland was working at a local beer distributor and getting adept at marketing and sales.

In 2012, Rick Vreeland said to his son: “You ought to be selling yogurt, not beer. If you are interested in having your own business, you are welcome to come and give it a try.”

Chris Vreeland gave it some thought and agreed.

He bought a van, designed product labels, got the boxes, had all the insurance in place, and started his own business selling yogurt and kefir products produced on the Freedom Hill Farm.

Thanks to relationships through his previous job and persistent store sampling effort, his products got into seven local stores in the first month and twelve in the second.

Now, his products are sold at over 70 stores between Brooklyn and Albany.

About three years ago, the Vreeland family opened a store on the farm so their customers could get milk, fresh bread, meat, syrup, and other products.

More importantly, Chris Vreeland gets to see his father much more, and mutual understanding grows.

“Whether it is a good day or a bad day, we get to see each other, say good morning, have a cup of coffee,” he said. “If he has something he needs help on the farm, I’ll go help—move the cows around, pull a calf out, or get the hay.”

“One of the biggest blessings about leaving my old job is the time I get to spend with my parents. Our relationship now is a lot different than what it was when I gave notice on leaving the farm,” he said.

Another blessing is that Chris Vreeland now has more freedom in his schedule to make time for his three sons, such as taking a day off to accompany them on school field trips.

He usually gets to the farm at around 5:30 a.m. to make yogurt, kefir, and buttermilk before driving out for a store delivery; he gets off at about 4:30 p.m. to coach basketball and baseball.

“That’s the nicest thing about having my own business,” he said.

The same goes for Rick and Julie Vreeland.

They now milk 35 cows twice a day and have the rest of the time to themselves. This summer, they plan to take two weeks off for a vacation.

“Julie doesn’t want to stop until she is 70. I will be 70 in July. Unless my body quits or something, I would desire to do this until I die,” Rick Vreeland said.

He hopes he can find someone to take over the job of milking cows in the near future.

The small farm also employs a part-time crew of about 12 people.

“Neither of us is here to get rich,” he said. “This is perfect, just how it is now. I don’t care to grow bigger.