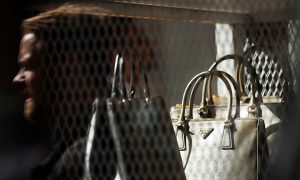 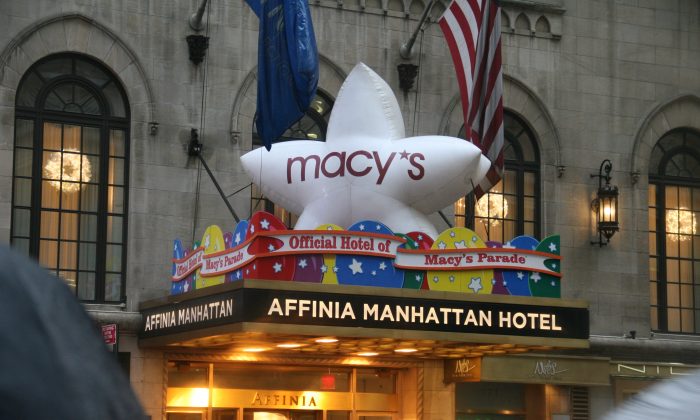 As Sales Grow, Cyber Monday and Black Friday Are Both Tempting Options

NEW YORK—As the city gears up for the holiday shopping season, experts predict an uptick in spending will reflect the recovering economy. The rise in spending also marks a shift toward online shopping and an earlier “Black Thursday,” which might intrude on the family tradition of Thanksgiving.

Amidst all these trends, the Best Buy on 44th St. and Fifth Ave. is surprisingly unobstructed from view: the long lines of early Black Friday bargain hounds are missing.

One employee commented that this year, for an unknown reason, the line hasn’t formed yet, while in past years, people would have been lined up around the door. The change has left workers scratching their heads.

Some explained that they find squeezing in with crowds to be too much of a hassle.

“If we’re looking for clothing, we can go to an outlet” to save, said Luna Feng, 19, a college sophomore visiting from Philadelphia. “I don’t like waiting for deals.”

Heath Hinson, 40, of Nassau County, Long Island, doesn’t believe there’s any deal to be found in the Black Friday weekend. Retailers are trying to sell the last of the old technology before the updates are shipped in, he said while in a Best Buy store in Midtown Manhattan.

He works nearby as an IT director and had to stop by the store to buy hard wired cables, but otherwise he wouldn’t be shopping, he said.

“I plan to eat, drink, sleep, wake up and then eat some more,” he said, describing his holiday plans. He compared people who stand in long lines, huddled in the cold, hunting for bargains to people who attend football games. “I’d never do that.”

The data stands. A quarter of U.S. consumers plan to spend more on holiday shopping this year, compared to 20 percent last year, according to Accenture Research, a management-consulting firm.

Yet, more of that spending will be done online than in 2013. Of the consumers who shop early during the holiday season, 37 percent are expected to shop online on Black Friday, up from the 32 percent who shopped online in 2013.

The report by Accenture noted increases in use of laptops and cellphones in holiday shopping as well. More than half of consumers will use a laptop or home computer to make purchases or assist in their holiday shopping this season, up 19 percentage points from last year. Twenty four percent of holiday consumers plan to use a smartphone, up from 18 percent last year.

Shop.org expects online holiday sales to grow 8 to 11 percent this year, including December. That would mean as much as $105 billion in holiday-related consumer spending.

What could be the reason? People are moving toward online shopping to avoid the crowds, for the free shipping, and higher online discounts, according to the report. Half of consumers want to avoid lines, up from 46 percent in 2013.

“Just buy it on Amazon,” laughed Evelyn Gui, 18, an international student at Cornell University. She’ll be spending the holiday season studying for finals, as her family is back in China.

If Gui does buy anything this weekend, it’ll be boots for the winter, she said.

Certainly Black Friday remains the busiest day of the weekend, with more than 131 million unique shoppers, and many of them are more than willing to wait hours in line. Experts predict a 4.1 percent increase in sales this year, to $616.9 billion.

Sales have increased incrementally in the past two years, which is indicative of the slow recovery from the recession. The peak hours are from 6 p.m. on Thanksgiving to 5 a.m. on Black Friday.

Meanwhile Cyber Monday, the online retail equivalent of Black Friday, coined in 2005 for the trend of people surfing the web at work for deals they missed over the weekend, is growing. But people still enjoy going to actual stores and touching tangible items.

Sayaka Uoyama, 18, a sophomore at SUNY Stonybrook University, will be hitting the Queens Center Mall at midnight Thanksgiving day with a former high school classmate after dinner.

“It’s definitely crazier in Manhattan,” she said, noting that the mall, located in Elmhurst, wasn’t too crowded in the early hours of Black Fridays in previous years.

She’s excited for the weekend, where she can shop for gifts and winter clothes. She has her eye on H&M, Forever 21, and Victoria’s Secret, among other stores.

Assistant superintendent of an office building in Chelsea Paul Krasniqi, 41, of Staten Island, said that before he and his wife had children, his wife used to go to the mall at about 5 a.m. on Black Friday for good deals on clothing.

This year, she might still shop on Friday, but “she’s probably not going to get up at five,” said Krasniqi, who has to work on that day.

He groaned at the thought of working Friday.

But the shopping bug hasn’t left him. “If I can find time after work, I’ll pop into a sneaker store,” he said, grinning. If not, there are always deals online.