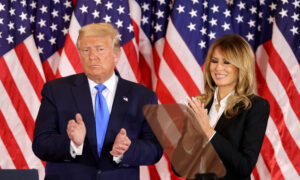 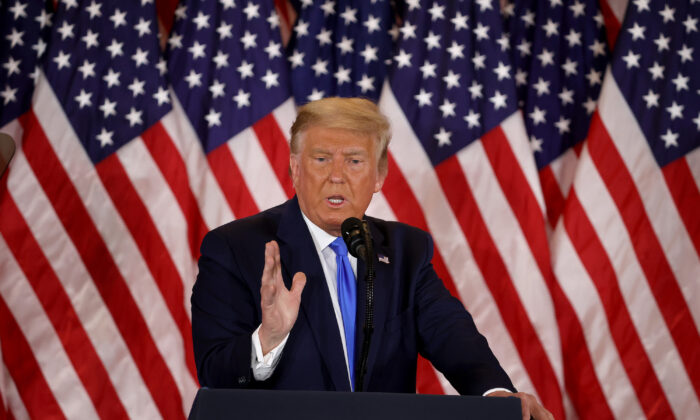 President Donald Trump speaks on election night in the East Room of the White House in the early morning hours of Nov. 4, 2020, in Washington. (Chip Somodevilla/Getty Images)
2020 Election

As Race Tightens, Trump Sues in Pennsylvania and Michigan, Requests Recount in Wisconsin

With no winner declared in the 2020 presidential election, the Trump campaign on Nov. 4 requested a recount in Wisconsin and filed lawsuits to halt vote counting in Michigan and Pennsylvania until Republican observers are granted access to the facilities counting and processing ballots.

The campaign also filed a lawsuit in Georgia later Wednesday seeking to separate out late-arriving ballots in the contested state.

In addition to the pending recount in Wisconsin, seven states were still counting votes as of 6:30 p.m. on Nov. 4, a process that may postpone the declaration of a winner for days. Former Vice President Joe Biden was in the lead in Nevada, Arizona, and Michigan. President Donald Trump led in Pennsylvania, Georgia, North Carolina, and Alaska.

Neither campaign declared an overall victory, though each candidate signaled his confidence in the ultimate outcome.

“I am confident we will emerge victorious,” Biden said.

Trump declared victories in Pennsylvania, Georgia, North Carolina, and Michigan in the evening on Nov. 4. His campaign on the same day filed lawsuits in Pennsylvania and Michigan to guard against alleged schemes by the Democrats “to disenfranchise and dilute Republican votes.”

The Trump campaign formally requested a recount in Wisconsin, where Biden led by 0.6 points with 99 percent of the votes tallied. The state’s legislation allows for a recount request when all of the votes have been reported, which hadn’t yet happened as of 6:30 p.m. Eastern time on Nov. 4. If granted, the recount could take up to 13 days.

One of the Pennsylvania lawsuits calls for a court to order a pause in vote counting until Republican observers are granted adequate access to supervise the process. The campaign filed a similar lawsuit in Michigan the same day.

At a Trump campaign press conference in Philadelphia, former Florida Attorney General Pam Bondi said the campaign was suing to stop the vote count because Republican poll observers were kept too far from the counting tables and scanners. The president’s personal attorney, Rudy Giuliani, suggested that the campaign may expand the challenges to other states.

“We were supposed to be allowed by law to observe the counting of the ballots,” Giuliani said. “Now, ‘observe’ means to any intelligent person being able to look at it. The way it’s interpreted by the Democrat crooked machine of Philadelphia is that the observers can be 20 or 30 feet away, never able to see the ballot itself, never able to see if it was properly postmarked, properly addressed, properly signed on the outside—all the things that often lead to disqualification.”

Trump held a formidable 5.3-point lead in Pennsylvania with more than 85 percent of the votes counted as of 6:30 p.m. on Nov. 4. Trump campaign manager Bill Stepien said the campaign had high confidence in its victory declaration by digging into the results at the county level. When the campaign declared victory in Pennsylvania, 1.12 million votes weren’t yet counted. Biden would need 78 percent of the uncounted votes to win the state.

Stepien noted that while some of the uncounted votes are in blue counties, others come from “Trump country,” including counties where 70 to 80 percent of the voters chose Trump.

Biden held a 1.2-point lead in Michigan as of 6:30 p.m. on Nov. 4, with more than 99 percent of the votes counted. The Trump campaign would need to be within 1 percent of Biden when all the votes are counted to request a recount.

“We have filed suit today in the Michigan Court of Claims to halt counting until meaningful access has been granted,” Stepien said in a statement. “We also demand to review those ballots which were opened and counted while we did not have meaningful access. President Trump is committed to ensuring that all legal votes are counted in Michigan and everywhere else.”

Decision Desk called Michigan for Biden shortly after 5 p.m. on Nov. 4. The Associated Press didn’t call a winner as of 6:30 p.m. Eastern time.

In Nevada, where Biden held a narrow 0.6-point lead, the secretary of state delayed the release of the results of additional counting until 9 a.m. on Nov. 5. More than 87 percent of the votes were counted in the state at the time of the announcement.

“Obviously, there’s a lot of interest in how the vote is going in Nevada and we recognize that,” Deputy Secretary of State for Elections Wayne Thorley told 8 News Now. “We will have a fairly large update hopefully later today, which again gets us even closer to final unofficial election results.”

Stepien called on The Associated Press and Fox News to retract their calls handing Arizona to Biden. Other race callers, including Decision Desk HQ, didn’t name a winner in the state as of 6:30 p.m. Eastern time on Nov. 4.

Arizona Secretary of State Katie Hobbs warned against early calls for races as the state continued to count a large number of ballots.

“I don’t have the job of calling races … but there are still hundreds of thousands of ballots left to count in Arizona, primarily in Maricopa County, so I think that I would advise caution in terms of celebrating victories right now.”

The Associated Press declared former Vice President Joe Biden the winner in Arizona at 2:50 a.m. on Nov. 4, when 20 percent of the expected votes had yet to be counted. The AP said there weren’t enough remaining ballots for Trump to catch up. Other race callers, including Decision Desk HQ, hadn’t declared a winner as of 2 p.m. on Nov. 4.

Arizona Gov. Doug Ducey, a Republican, said in an afternoon statement on Nov. 4 that Arizonans who voted deserve to have their voices “heard fairly and accurately.”

“Arizonans turned out in historic numbers for this election, and we owe it to them to count their votes. The results have shifted greatly hour by hour, and from last night until today,” Ducey wrote. “With hundreds of thousands of votes still outstanding, it’s important that we be patient before declaring any races up or down the ballot.”

“Those are early ballots that were dropped off [Tuesday] or received Monday,” Hobbs said.

Counties in Arizona have five days to verify provisional ballots and cure signature mismatches, Hobbs said. Each county has up to 20 days after the election to finalize results.

“Nothing is official until our office signs off on the canvass at the end of November,” Hobbs said. “What I’m focused on is making sure that we get it right. And that does take time.”