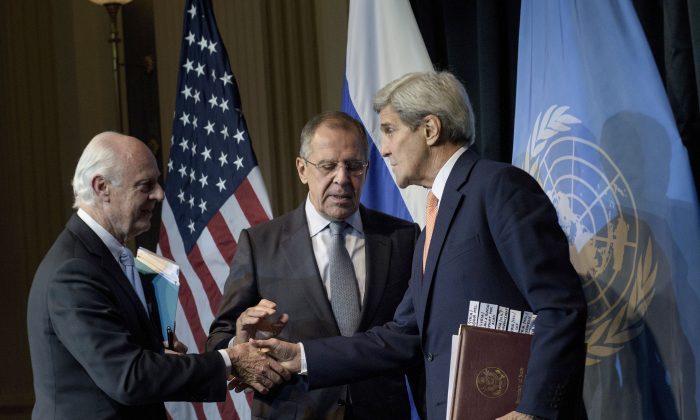 As Powerbrokers Gather at Last, Russia Races Against Time to Save Assad

After years without any progress on solving the Syrian conflict, a major international summit has been convened in Vienna to try and reach an agreement on a new way forward. The United States, Russia, several European countries, and Middle Eastern states are attending; so is Assad’s ally Iran, after Washington finally agreed to let it in. Also at the table are Turkey and Iran’s deadly rival Saudi Arabia, both dedicated foes of the Syrian regime.

Under discussion is whether Bashar al-Assad can remain in power during a “political transition”—a strategy long pursued by Russia, though so far to little end. If the assembled powers finally agree to it, that’ll be a major victory for Moscow.

The stakes could scarcely be higher. If Russia can corral this array of countries into tolerating Assad, even for the short term, it will have turned an initial triumph into an even greater achievement. But if it fails, it will have to cope with both dire embarrassment and a tricky military situation.

If Russia fails to corral this array of countries into tolerating Assad, it will have to cope with both dire embarrassment and a tricky military situation.

Having committed its air force and advisers to backing a six-front offensive by the Syrian military, Russia has seen Assad’s forces fail to gain much territory, even suffering losses in counteroffensives by both Syrian rebels and ISIS.

Vladimir Putin, who has bet he can eclipse the United States and Saudi Arabia in Syria’s four-and-a-half year conflict, badly needs this summit to get him out of what is fast becoming a quagmire.

Before its stunning late-summer military intervention, Russia’s Syria strategy was a dud. Throughout 2014, it failed to make headway when it hosted meetings between Assad officials and a nominal opposition. So in 2015, Russia and Iran began trying to hold an international conference to recognize the legitimacy of the Syrian regime and promise a transition in the future.

That effort was scotched on Aug. 11, when Saudi Foreign Minister Adel al-Jubeir tore up the Russian script. Emerging from talks with his Russian counterpart Sergei Lavrov, Jubeir said Assad had to leave before any negotiations could begin. Lavrov, caught by surprise, was caught on a live microphone muttering “morons.”

This put Putin and Lavrov in a political crisis. The head of Iran’s elite Quds force, Gen. Qassem Soleimani, had traveled to Moscow in late July to warn that the Syrian military—and therefore the Assad regime—were on the point of collapse. The Saudi rejection appeared to leave no alternative to a Russian–Iranian ground effort to help Assad’s forces hold a line from Latakia on the Mediterranean through Homs to Damascus. Putin went even further—and turned this adversity into a challenge to the West. Almost overnight, battlefield armored vehicles, dozens of warplanes, and hundreds of troops were dispatched to western Syria, and on Sept. 30, Russia began a major bombing campaign. At least 80 percent of the attacks were on Syrian rebels rather than ISIS, the ostensible target.

Soon afterward, the Syrian military—joined by Hezbollah, Iranian commanders and fighters, and Iraqi militia—launched the first of its six offensives across Hama, Homs, Latakia, and Aleppo provinces.

Putin’s message to the United States and its allies was clear: join us in our vision of a political resolution or face a Russian escalation—and even the possibility of a clash with other air forces over northern Syria.

But Putin also offered Washington and its allies a tactical opening. Even though Moscow’s first priority was to damage the rebels and blunt their threat to Assad, everyone could still say that this was still an effort against ISIS.

Within days, the gamble paid off—the United States, Britain, and Germany all said that Assad could stay for some period of time pending a transition. Despite Turkish President Recep Tayyip Erdogan’s visceral hatred of Assad, Ankara also signed up. Even Saudi Arabia, the leading outside backer of the rebels, said that the Syrian president did not have to go immediately.

Now, with Iran on board as well, all eyes are on Vienna. Moscow has to get these countries to formally put up with Assad not just for six months, but until discussions over the “transition” are completed.

There’s a long way to go. Despite their embrace of the Russian process, American officials are still staying that Assad cannot be part of Syria’s future. Saudi Arabia, meanwhile, is presenting an ultimatum that Assad must either step down soon or be removed by military action.

That warning speaks to an even bigger obstacle for Assad and Putin: the Syrian rebels.

Moscow could have tailored its military intervention to holding the Latakia–Homs–Damascus defense line, using its warplanes and weapons to contain any advance by rebels who had taken much of northwest Syria during the spring and summer. Instead, joined by the Iranians, it went much further.

The plan was for the Syrian military not just to take opposition-held pockets of Hama and Homs provinces, but also to move back into Idlib Province, which is almost completely controlled by rebels. It would surround Syria’s largest city, Aleppo, which has been divided since July 2012.

Only three weeks after the launch of this offensive on six fronts—five of them against rebels, one against ISIS—it’s in serious trouble. Despite hundreds of sorties by Russian jet fighters and rocket attacks by low-flying helicopters, Assad’s forces have taken little territory and failed to capture any strategic positions.

In at least two areas, the tables have been turned on the regime and Russia. East of Aleppo, ISIS has seized 10 miles of the main road into the city, cutting off up to 1 million people in the regime-held areas. In northern Hama Province a rebel counteroffensive has reclaimed almost all territory and is now challenging the town of Morek, on the highway from Hama to Aleppo.

Russia and Iran are discovering that airpower cannot cover the deficiencies of the Syrian military, short of manpower and command expertise, on the ground. Having withstood the initial assaults, rebels are getting more confident.

Putin faces an unpalatable decision. To preserve the impression of strength, he may have to join Iran in committing ground forces, possibly in the guise of “volunteers,” as well as providing air power to the offensives. However from the outset of its intervention, Russian officials have promised that their troops will not go on to the battlefield. And there’s no guarantee of success, as Afghanistan in the 1980s all too vividly demonstrated.

The dilemma can only be resolved by success in Vienna. If the United States and others allow Assad to stay for now, they will also shield his regime from any rebel challenge. That would give Damascus the protected area that has been denied to Syria’s civilians and rebels for years.

Washington and the European powers may well choose that course. However, Saudi Arabia and possibly Qatar are a bigger obstacle.

Russia may have calculated that Saudi resistance will be limited because of difficulties with its own intervention in Yemen, where Iran might step up support for Riyadh’s opponents. However, claims are circulating that Saudi Arabia has increased supplies of weapons to the rebels to meet the Russian challenge, and that it may even consider deploying anti-aircraft missiles—previously taboo because of U.S. objections.

Putin is receiving support from some unexpected quarters. Just days before the Vienna summit began, the chairman of the U.S. Joint Chiefs of Staff, Gen. Joseph Dunford, told a Senate hearing, “The balance of forces right now are in Assad’s advantage.”

This is testimony to Washington’s confusion and detachment from the realities on the ground, but it won’t bother the Russian president. The United States has tacitly accepted his attacks on Syria’s rebels, finally accepting the pretext that this is all a fight against “terrorists”—effectively anyone opposing Assad, whether peacefully or with arms—and not just ISIS.

But inside Syria, the battlefield matters more than the political outcome. Contrary to Dunford’s claim, rebels have been ascendant in the northwest and areas of the south, as have Kurdish forces in the northeast and ISIS around Aleppo and in Palmyra.

Putin’s astonishing gamble has done little to reverse this situation. Going into the Vienna talks, his new bet is that he can overcome it by converting the United States, Saudi Arabia, and others to the cause—a tall order, but quite possibly his only hope.

Scott Lucas is a professor of international politics at the University of Birmingham, U.K. This article was previously published on TheConversation.com