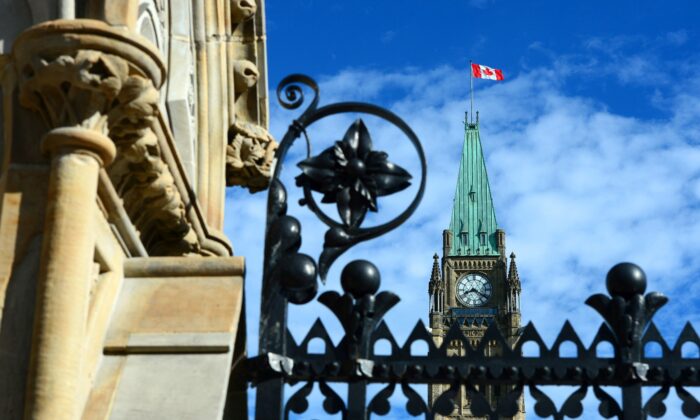 The Peace Tower on Parliament Hill in Ottawa in a file photo. (The Canadian Press/Sean Kilpatrick)
Canada

As Parliament Resumes, Fresh Faces in Cabinet May Be All That’s New

With the resumption of Parliament on Nov. 22, the Liberals will be looking to have a raft of legislation passed, and although the 44th federal legislature is not much different in composition from the previous one, new cabinet ministers and pressures on the Conservative leader could result in some interesting dynamics between the two rival parties.

The Liberals’ election platform had pledged to introduce or reintroduce various new laws within 100 days of taking office. One new law would provide 10 days of paid sick leave for all federally regulated workers. Promised laws among those that had been introduced in the previous Parliament but did not pass into law include:

Don Desserud, political science professor at the University of Prince Edward Island, says the Liberals have less reason this time to change their policy approach than in 2019, since they’re in the same minority situation as when they were first reduced to a minority that year.

“It’ll be interesting to see how the new cabinet performs in the first little while. There will be the usual blunders and mistakes as new cabinet ministers learn the new portfolios until they get their sea legs, so to speak. But otherwise, I think it’ll be much the same as we’ve seen before in terms of policy direction,” Desserud told The Epoch Times.

Nelson Wiseman, professor emeritus of political science at the University of Toronto, has a similar view. “I think the Parliament actually will work very much like the last Parliament, which frustrated the Liberals,” he said in an interview.

Desserud says he doubts Trudeau will use “the old gunslinger approach” of his father Pierre Trudeau and dare the opposition to take down his minority government.

“I don’t think you’ll see that because I think his own party will pull him back, if nothing else, realizing that they dodged a bullet this last time, and things could have been a disaster.”

Trudeau has the recent example of how former prime minister Stephen Harper made his minority government work, he says.

“Harper wrote a new playbook for running a minority government, and he did extremely well by basically saying you don’t need to have one party’s support, you can basically get support from some different parties on different issues,” Desserud said.

“He’ll play one against the other in a way, so I suspect it’ll be a little more dynamic.”

In the lead-up to the resumption of Parliament, the Tories have been warning about the Liberals potentially forming a coalition with the NDP, but NDP Leader Jagmeet Singh is adamant there’s no deal between his party and the Liberals.

Nonetheless, Singh said he is open to discussions and co-operation with the Liberals to make Parliament work. The Liberals will likely also have the support of the Bloc Quebecois on certain bills they wish to see passed.

Wiseman says the minority Liberals will encounter challenges from the opposition that will include demands for more disclosure on what went on at the high-security lab in Winnipeg that was subject of an RCMP raid, and efforts to stall parliamentary proceedings not deemed in the opposition’s favour.

The Conservatives are also putting a focus on criticizing the Liberals on issues of affordability and the economy. In his new shadow cabinet, O’Toole restored MP Pierre Poilievre to the finance file.

At a press conference on Nov. 14, a week before the speech from the throne, Poilievre blamed Liberal spending for creating Canada’s 4.4 percent inflation rate, the highest since the Liberal government of Jean Chretien 18 years ago.

Desserud also notes that Conservative Leader Erin O’Toole is “under siege” and has to prove himself by “going on the attack” against the governing Liberals.

Desserud says O’Toole will need to “really show that he’s the guy, and one way of doing that is speaking very aggressively to the opposition.”

“He will try to drive wedges. He will try to embarrass the NDP by saying, ‘Look what you’re doing, you’re propping up this government. You’re selling yourself out, selling out health care, your principles,’ that sort of thing. Or vice versa, that ‘Your tail is wagging the dog,’ the Liberals are in bed with or indebted to the NDP.”