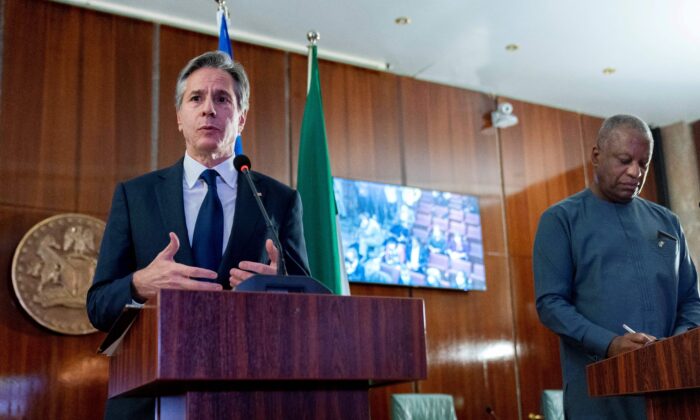 Although the State Department assigned that designation to Nigeria a year ago, it was rescinded shortly before Secretary of State Antony Blinken’s visit there on Nov. 18.

The Family Research Council and 11 other nonprofits have implored the White House to reverse itself, in view of a worsening situation for Christians as well as vulnerable Muslims in Africa’s most populous country.

“We urgently request that the Biden administration redesignate Nigeria as a Country of Particular Concern (CPC) on religious freedom,” according to the letter sent to the White House on Dec. 7.

“For years, the Nigerian government has done virtually nothing to stop this violence,” the letter says. “In order for Nigeria to have been removed from the key list of Countries of Particular Concern, it ought to have demonstrated substantial progress in protecting religious communities from attacks and affirming the right of all people to practice their faith freely.

“This did not happen, and the removal of Nigeria’s CPC designation is unjustified and sends the wrong message to governments around the world who engage in or tolerate egregious violations of religious freedom.”

Since 2009, Nigeria has been fighting two kinds of violence that have taken more than 60,000 lives, according to the International Committee on Nigeria.

The ISIS terrorist group is linked to the insurgency known as the Islamic State of West Africa and its predecessor group, Boko Haram, in the northeast region of the nation. At the same time, radicalized bandit gangs operating in the north-central and northwestern regions of Nigeria and the region known as the Middle Belt have killed thousands of unarmed Christian farmers. Over the past two years, the bandit gangs have become the more deadly threat.

On Dec. 6, a large gang in the northern state of Sokoto firebombed a busload of civilians, killing 29 people, including many women and children, all of them Muslims. Bandit gangs reportedly have attacked and annexed 380 villages in the Middle Belt in recent years, the great majority of them occupied by Christian indigenous people who were displaced.

The criminal gangs, which began forming in 2012 in the state of Zamfara, have swelled in size and threat in recent years so that as many as 10,000 armed gang members are terrorizing the civilian population, says historian Murtala Ahmed Rufa’i, a gang expert at Usman Danfodio University in Sokoto.

The Islamic insurgency and the anti-Christian bandits have a common objective, which is the removal of Christian settlements from the country, according to war correspondent Lara Logan, who broadcast a Fox Nation documentary on Nigerian terrorism on Sept. 27.

“How can it be, less than a year after that significant designation, that Nigeria’s CPC designation has been dropped without a public explanation?” the letter reads.

“The ongoing violence, killing, and displacement against Christians and others have only increased. In fact, during 2021, massacres happen almost nightly, while by day, young boys are killed in the fields. Pregnant women are brutally dismembered, their babies mutilated before their eyes. And now, an entire church congregation has been abducted and held captive.”

The letter to Biden says that removing the CPC designation from Nigeria appeases terrorism.

“We implore you to immediately redesignate Nigeria as a Country of Particular Concern. Failing to do so rewards the Nigerian government for tolerating and engaging in egregious, systematic, and ongoing religious freedom violations and sends a message to extremists that their actions will go unpunished,” the letter states.

Baroness Cox, founder of the UK-based Humanitarian Aid and Relief Fund and one of 30 signers of the letter, told The Epoch Times: “It is deeply concerning that the United States has removed Nigeria from the list of Countries of Particular Concern, and this needs to be addressed. The murders and rapes are still going on, and we need to act to protect the Nigerian people from this violence.”

During his stop in Abuja, Blinken announced a $2 billion aid package to assist Nigeria over the next three years and spent 45 minutes talking to a small group of representatives of civil society.

That small group engagement included hearing from Rev. Joseph Hayab, a spokesman for the Christian community in Kaduna state. However, Blinken didn’t mention human rights as a concern during his stop except when directly asked about it in an interview with Channels TV; the topic discussed was police brutality in Lagos, and not the rampant killings of Christian Nigerians, which some have called a Christian genocide.