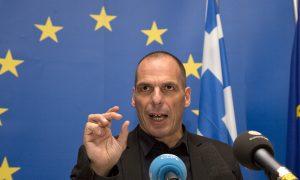 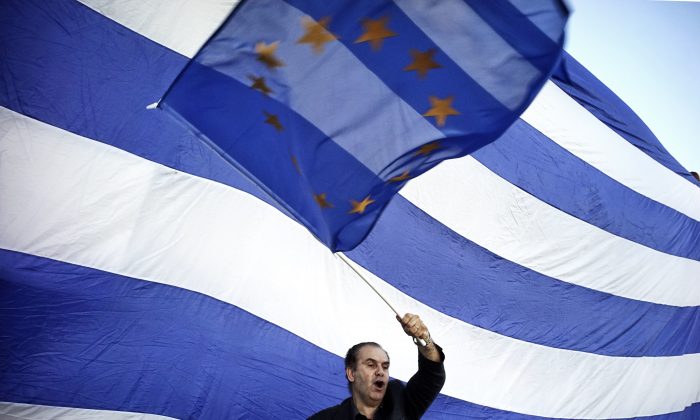 A man waves a EU flag as pro-Euro protesters take part in a rally in front of the Parliament on June 22. 2015 in Athens, Greece. (Milos Bicanski/Getty Images)
Business

Figuratively, Greece and its creditors have been playing pingpong for the last couple days. Send a proposal here, send a counterproposal there. Ping. Pong.

The most recent proposal by the International Monetary Fund to force the country to raise money by cutting pensions (instead of raising taxes on businesses) was again rejected, according to Market News:

“The new proposal, sent to Greece late Tuesday, was deemed unacceptable by the Syrzia-led government, the official said, who used a Greek expression to suggest that receiving it was like ‘touching fire.'”

So the ball is again in the IMF’s court. It seems that Greece is comfortable with its leverage over the Eurosystem as a whole and not afraid to push the envelope.

On the other hand, creditors also do not seem to want to continue giving Greece a helping hand.

German central bank executive board member Joachim Nagel said at a press conference in Frankfurt: Giving Greece another debt relief “sets the wrong incentive for other countries … At this stage, a second debt relief would set the wrong incentives, especially for governments that are already weak,” according to Market News.

Dennis Snower, an American professor at the University of Kiel, Germany, thinks the solution could be in the middle.

“The ECB [needs] to assess realistically Greece’s lack of solvency and so stop providing [emergency] funds to its banking system. This would precipitate a payment crisis for Greece. But, recognizing the impending disaster, Greece would genuinely commit itself to the structural reforms that are in its own long-term interests: boosting the labor market’s flexibility, selling state-owned enterprises that most other European countries have already placed in private hands, and spending less on public-sector bureaucracy,” he writes.

So, by forcing Greece to actually commit to genuine reform (this is what the IMF tried to do with its proposal), creditors could then provide some leniency with debt repayments.

“Its creditors would agree to another one-time debt write-off—large enough to enable Greece realistically to repay its debts in the future, but small enough to avoid unnecessary transfers of credit. Greece would remain within the eurozone, having lost some of its fiscal and structural sovereignty.”

If Greece doesn’t agree to reform, even Snower thinks the only option is to default and leave the eurozone—and start from square one.