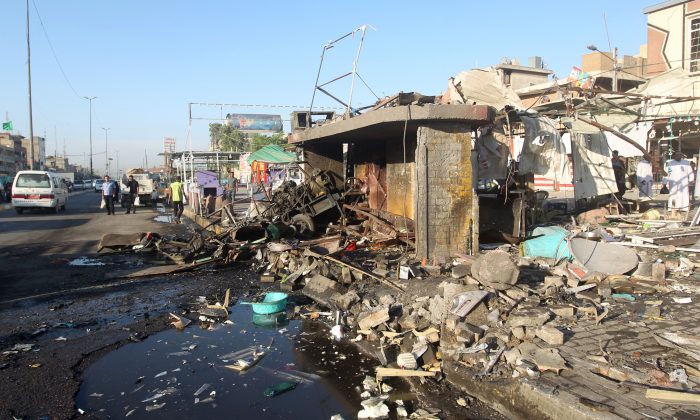 A picture shows the site of an explosion in the aftermath of a car bomb attack in the mostly Shiite Sadr City district of Baghdad on Oct. 9, 2014. (Ahmad al-Rubaye/AFP/Getty Images)
Middle East

The attacks come as Iraq faces its greatest challenge since the 2011 withdraw of U.S. troops, as militants from the Islamic State group now hold vast swaths of the country and neighboring Syria.

Also in Shula, police said a suicide car bomb attack on a security checkpoint killed 18 people and wounded dozens others.

Hospital officials confirmed the casualty figures for the attacks. All officials spoke on condition of anonymity because they were not authorized to brief journalists.

Nobody claimed responsibility for the attacks, yet Sunni insurgents frequently target Shiite population they deem as being heretics. That includes the Islamic State group, which now holds a third of the country in its sway. After a lightening offensive earlier this year.

The U.S. military also said it conducted multiple airdrops Friday near the northern town of Beiji to resupply Iraqi security forces operating there. The airdrops delivered food and water, as well as 16,000 pounds of ammunition, the military said.

The Islamic State group has beheaded a number of journalists in Syria, saying the killings are in retaliation to U.S.-led coalition airstrikes in Iraq and Syria.

Reporters Without Borders said last month that the militants had threatened to kill al-Azzawi, a father of three, for refusing to join the Sunni militant group. The media watchdog said al-Azzawi was abducted on Sept. 7.

Also in Tikrit, an attempted attack on the Camp Speicher military base was foiled after soldiers killed four suspected Islamic State militants, authorities said. Two officials at the camp said the four men — one of them identified as an Indonesian national — attempted to break through the gates of the camp in a suicide attack with a truck loaded with explosives. They were unable to break through, the officials said, and guards killed the four men. Both officials spoke on condition of anonymity as they were not allowed to brief journalists.

Camp Speicher is an air base that previously served as a U.S. military facility.

From The Associated Press. AP writers Vivian Salama and Murtada Faraj contributed to this report.