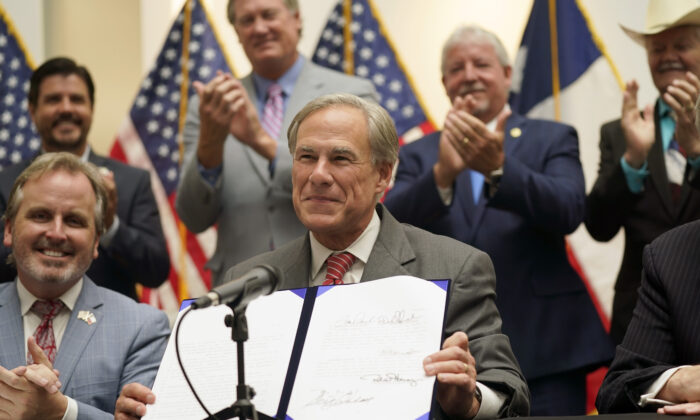 Texas Gov Greg Abbott shows off Senate Bill 1, also known as the election integrity bill, after he signed it into law in Tyler, Texas, on Sept. 7, 2021. (LM Otero/AP Photo)
US

In 2021, the Republican-led legislature in Texas passed Senate Bill 1, a sweeping election reform bill applauded by conservatives for adding protection against voter fraud.

Democrats, on the other hand, vehemently opposed the bill calling it voter suppression.

The law banned several practices, such as 24-hour and drive-thru voting, which Harris County used in 2020.

It forbids counties from sending out mail-in ballot applications to people who didn’t request them. It also required mail-in ballots that are dropped off to be received by an election official, not a drop box.

The bill authorized election audits starting with the 2020 election. Phase one of the audit results released in December found a total of 11,737 potential non-U.S. citizens registered to vote in Texas.

Auditors are now working on phase two of the audit to address voter rolls in four heavily populated counties—Collin, Dallas, Harris, and Tarrant, which account for about 10 million people or a third of Texas’ population.

Watchdog groups and politicians think the new voter integrity laws will help Texas administer fair elections going into 2022. But that doesn’t mean Texas should let its guard down, especially with the upcoming midterm elections.

In South Texas, Republicans hope to flip three Congressional seats and win back control of the U.S. House of Representatives.

Flores won her seat temporarily during a special election in June, making her the first Republican to win the district in more than a century. Flores must defeat Democrat Congressman Vicente Gonzalez in November to keep the seat.

Ballot harvesting, while illegal, has been around for years in Texas.

During the 2017 special session of the Texas Legislature, lawmakers were concerned enough with ballot harvesting to pass Senate Bill 5. The law tightened mail-in ballot rules and increased criminal penalties for ballot fraud during the 2018 election cycle.

In June, Texas Attorney General Ken Paxton announced the successful prosecution of a vote-harvesting in Victoria County, in the Rio Grande Valley area.

Monica Mendez of Port Lavaca pleaded guilty to 26 felony counts of voter fraud, including three counts of illegal voting, eight counts of election fraud, seven counts of assisting a voter to submit a ballot by mail, and eight counts of unlawful possession of a mail ballot.

Mendez ran a vote-harvesting operation on behalf of a subsidized housing corporation in order to influence the outcome of a utility board election.

In South Texas, the practice of paying operatives called “politiqueras” to get out the vote has sometimes crossed the line into guaranteeing the vote through ballot harvesting.

Orthal Brand Jr., who ran for mayor of McAllen, Texas, was promised hundreds of votes in 2021.

A politiquera walked into his office and told Brand he could deliver hundreds of ballots already signed by voters but with the chosen candidate left unchecked. Brand didn’t accept the man’s offer, which was illegal.

As a resident of South Texas for more than 60 years, Brand, whose father before him was a longtime mayor, told The Epoch Times he believes election integrity laws will cut back on vote harvesting. But, he has no illusions that it will stop.

“It’s not gone by any stretch of the imagination,” Brand said. “Politics and the culture here are just different than anywhere else in the state of Texas.”

He remembers stories in the past of politiqueras giving voters strings with knots in them.

Voters would line up the string on a ballot and vote for the candidate next to the knot. These operatives would get paid per vote delivered. Most of their harvesting is conducted at adult daycare centers. Mail-in ballots are the most significant area of fraud, Brand said.

Of the 11,737 potential non-citizen records found statewide during phase one of the Texas audit, 327 records were identified in Collin County, 1,385 in Dallas County, 3,063 in Harris County, and 708 in Tarrant County.

As of December 2021 audit release, Dallas County had canceled 1,193 of these records, and Tarrant County canceled one. Neither Collin nor Harris canceled any potential non-voting forms.

Phase two of the forensic audit will determine the counties’ efforts to correct the records.

The voting watchdog foundation filed a lawsuit in federal court against the election administrator in Starr County, Texas, in 2016 for failing to make a reasonable effort to maintain the county’s voter rolls.

Federal and Texas data suggested that from 2010 to 2014, the registration rate ranged from 100 to 110 percent—very much outside the norm for other Texas counties of similar size.

Starr County agreed to a settlement in 2018 on a process to update and maintain voter rolls, according to the foundation.

Adams also pointed to a 2020 Texas case against Ann Harris Bennett in her capacity as Harris County Voter Registrar. She allegedly processed voter applications when applicants marked no on the citizenship question.

While the Texas audit showed areas of concern, the secretary of state’s office said the issues weren’t significant enough to affect the presidential election in 2020.

Overall, Trump carried Texas with 52.1 percent of the vote to Biden’s 46.5 percent.

Secretary of state John Scott portrayed the Texas audit in November as the country’s “most comprehensive forensic audit of the 2020 election.”

Scott added that the audit would use analytical tools to examine the literal nuts and bolts of election administration to determine if any illegal activity may have occurred.