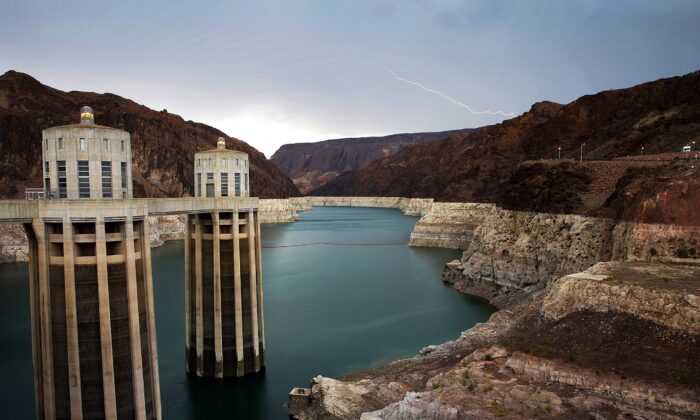 As Lake Mead Dries Up, Gruesome Discovery Is Made in a Barrel

BOULDER CITY, Nev.—As Lake Mead in Nevada recedes further due to the ongoing drought, it slowly gives up its secrets.

It would be the second of two gruesome discoveries made at the man-made reservoir this year.

A week earlier, on May 1, a woman from Las Vegas found a rusty barrel at Lake Mead’s Callville Bay. The barrel contained the skull and bones of an apparent homicide victim in disco-era clothing—Kmart brand, no less.

“The first thing that crossed my mind was a question—was this a mob hit? The person was shot in the head. That’s a common technique that’s used by the mob. They were stuffed into a barrel and dumped into a lake,” said Geoff Schumacher, author, journalist, and vice president of exhibits and programs at The Mob Museum in Las Vegas.

How many more bodies will surface in time, he wondered.

The water level at Lake Mead has dropped to just over 1,000 feet in elevation, leaving in its muddy wake beer cans and various other debris—even a sunken motorboat near the 2021 water level at Callville Bay. Lake levels are expressed in altitude, not depth. At its highest levels, the lake is near 1,225 feet.

Both findings have television’s “NCIS: Las Vegas” written on them. In real life, detectives from the Las Vegas Metropolitan Police Department (LVMPD) are investigating.

“We believe this is a homicide [due to] a gunshot wound,” LVMPD Homicide Section Lt. Ray Spencer said in a May 3 statement.

The Clark County Coroner’s office in Las Vegas said that “all information is still pending” regarding the victim’s identity.

LVMPD homicide detectives also believe the victim died in the mid-1970s to early-1980s, basing their opinion on the clothing and footwear found with the victim.

Schumacher said the victim’s clothing and shoes were purchased at Kmart, indicating a low-level mob player or victim of a mob-associated group.

Contrary to popular belief, most victims of mafia vengeance don’t end up in dirt holes in the scorching Nevada desert, he said.

“When you think about the mob in Las Vegas, you typically think about dumping a body out or burying it in the desert,” Schumacher said.

“The truth is, there aren’t probably as many mob victims in the desert as mythology would suggest. That said, there have been some. This is the first time we’ve come into a focus [where] you could also dump bodies out in Lake Mead. It’s the closest body of water to Las Vegas—really, one of the only bodies of water near Las Vegas because of the desert.

“If you’re going to dump a body in water, then that’s the place to do it.”

Schumacher said one of the first mob killings involving a victim left inside a barrel occurred in New York City in 1903.

That body, however, wasn’t thrown into the lake but was left on the sidewalk “for all to see.”

“It became known as the ‘Barrel Murder’ of New York,” Schumacher said.

The finding of prominent Chicago mobster John “Handsome Johnny” Roselli in a barrel in Miami in 1976 coincided with a government crackdown on organized crime.

“The mob was fairly prominent in Las Vegas at that time. They were also in a lot of trouble because the state gaming regulators [and] the FBI were starting to increase the intensity of their focus on the mob,” Schumacher said.

“The mob was facing a lot of indictments and trials, so that meant a lot of witnesses [helping the government]. They wanted to get rid of a lot of informants.”

Schumacher said the general feeling is that Roselli had been “talking a little too much.”

Soon after Roselli’s disappearance, his body turned up in a barrel on the surface of a bay outside of Miami.

“A fisherman found him. They discovered it was Johnny Roselli in the barrel,” Schumacher said. “That barrel wasn’t intended to float—it was intended to go to the bottom, as the one did at Lake Mead. For whatever reason, it didn’t work, and it bobbed to the surface.”

Schumacher said Vandermark was working at the Stardust Hotel when he allegedly got into trouble with the mob and disappeared.

While it’s an unlikely outcome for the barrel found at Lake Mead, “We’ll see if it’s him. It seems like a long shot, but we’ll see,” Schumacher said.

Schumacher said that the Kmart clothing on the Lake Mead victim suggests several possible theories for the killing.

“It could be a drug deal gone bad or a drug addict who didn’t pay or stole from the dealer. It’s hard to know until we find out the identity of the victim.”

“Our particular focus isn’t on anyone who went missing but on anyone who might be related to organized crime in some way. One way to look at this is to understand this isn’t necessarily a mobster in a barrel [but] a potential mob victim.”

He said the killer—or killers—probably dumped the barrel in a shallower part of the lake and didn’t understand it’s a lot deeper if you go toward the lake’s center.

“They also couldn’t predict that the lake would dry up to its present degree,” he said.

Schumacher said police have received numerous tips since the body’s discovery. Still, it could take months to identify the victim, even through DNA analysis.

Until then, more bodies—mostly drowning victims—could “start surfacing” at Lake Mead, he said.

Retired Orlando Master Police Officer Derwin Bradley, a member of the Board of Experts of the National Museum of Crime and Punishment in Washington, said the barrel discovery at Lake Mead points to a mafia-related killing.

“That was my very first thought: A body in a barrel; a gunshot to the back of the head. It’s a classic gangland-style hit or assassination. Pretty cut and dried for those guys,” Bradley said.

“It all depends on the message they’re trying to send and what the actual event [required]. If I want to make this person disappear, we take him out, put a bullet in him, put him in a barrel. That way, there’s no trace back to us. It would be years before they find this person—theoretically.”

Bradley said that determining the victim’s identity will involve legwork, starting with missing person reports from the early 1970s.

“That’s the only way you’re going to get a lead. Hopefully, from there, he will be reported missing. If he’s not from Vegas, you’ve got a big job on your hands,” Bradley told The Epoch Times.

More than likely, he said, the victim crossed the “wrong” person when doing business.

Given the mob origins of Las Vegas, Bradley sees all the signs of a mafia hit for reasons still undetermined.

“Remember, your average person back then is not typically prone to planning, plotting, executing a murder, and then going through the whole ordeal of dumping in a lake. A non-mob connected casino—that would be a big step for them [that would risk] being ‘dimed-out.'”

Above all, “people typically don’t talk,” Bradley said. “Even with serial killers, they often don’t go through that much trouble. A private citizen—that’s a lot of work. I’m not saying they wouldn’t do it, but I don’t see Bob and Bill being that thorough.”

After 28 years in the Orlando Police Department, Bradley said he’s never seen a case involving a body found in a barrel, “but we’ve seen some pretty ugly findings.”

Sitting outside The Mob Museum in Las Vegas, Tera Nix, a dentist from Cleveland, told The Epoch Times she wouldn’t be surprised if Lake Mead turns out to be a dumping ground for mob victims, given its size.

“I don’t know if this was an actual dumpsite, but what else would it be? You either have some random serial killer, or you have organized crime. So, we’ll know [if there are] a few more bodies,” Nix said.

Patricia Breezy, a resident of Las Vegas, said “it would not surprise me” if the barrel found at Lake Mead were a mob murder.

“It’s shocking anyway in this day and time to hear about some things. But to hear about it just now—and who knows how long it’s been there? So, somebody possibly could have gotten away with it, you know, because I’m not too affiliated with how it was back then, but the timeline would make sense because things were a lot different back in the ’80s.”

How Not to Dispose of a Body

“It just doesn’t sound like a mafia hit to me,” said Joseph Casaletta of Los Angeles, who came to The Mob Museum on May 12 to replace a broken mug that he gave his late dad years ago.

“I don’t think they would put a body in a barrel they would find at some point. I think the mafia is much better at making people disappear. That’s just my feeling about what I know about mafia types.

“If I were the murdering type, I’d make sure the body could never be found. If you put a body in a lake, it [will] get found. Plus, you’ve encased the body in something that can’t be consumed by nature. That seems derelict to me.”

“It’s an unfortunate news story that we hear every summer that somebody falls victim to drowning at Lake Mead. I don’t know how often the bodies can be recovered in those situations,” Mack told The Epoch Times.

“A body in a barrel appears to be a homicide. Some of the other remains that may yet be found—[there’s a] pretty high probability some of those are the drowning victims,” Mack said.

Undoubtedly, the public has a dark fascination with the mafia. The discovery of a body in a barrel at Lake Mead has only heightened that morbid curiosity.

The question is, why?

Schumacher said he thinks the mob mystique keeps people enthralled with a false image of who they are.

“Think of the best movies made in our country. Many were mob movies, like ‘The Godfather,’ ‘Goodfellas,’ and ‘Casino.’ And then you have television programs like ‘The Sopranos’ and ‘Boardwalk Empire,’ which are highly honored.”

Such charismatic figures as New York’s “Dapper Don” John Gotti only present a glamorous public facade that belies their murderous ways, he said.

“I think it’s almost that twin persona,” Schumacher said. “There’s this sort of secret, subconscious feeling that it would be exhilarating and fun to be a mobster so that you could have this sort of lifestyle. People—especially men—do see these guys as untouchable iconic figures they want to emulate in their imagined life.”