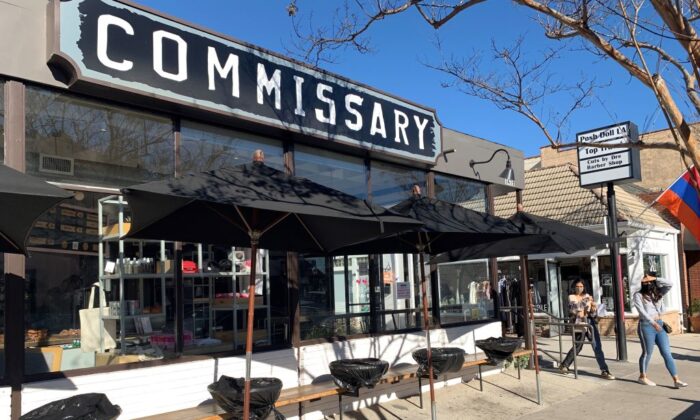 Outdoor tables are covered with plastic bags to prevent use outside a coffee shop in Glendale, Los Angeles County, on Nov. 29, 2020. (Robyn Beck/AFP via Getty Images)
Southern California

As LA Bans Outdoor Dining, Restaurants Ask ‘How Long Can We Hold On?’

Los Angeles is the only county in California to have banned outdoor dining at restaurants. The ban went into effect on Nov. 25 and will remain in place for at least three weeks. Restaurant owners still holding on after months of restrictions worry it’s enough to put them out of business.

The announcement came days before Thanksgiving in response to a record-spike in COVID-19 cases over a 5-day period in the county.

“Public Health reminds everyone to stay home as much as possible for the next two to three weeks to change the trajectory of surging cases and save lives,” the Los Angeles Public Health Department (LAPHD) said in a statement.

A little over 3 percent of cases nationwide were likely transmitted in restaurants, according to a Centers for Disease Control (CDC) study cited by the LAPHD.

“How long can we hold on without making money?” asked Tony Boon, owner of Pink Pepper Thai restaurant.

It could be the end of his restaurant, which has been a neighborhood fixture since the 1980s. It’s not unusual to see celebrities in the modest-looking restaurant on N. La Brea Ave., south of Hollywood Boulevard.

“With the outdoor dining gone again, it’s like pulling backwards to like in April and May,” Boon said. Even with outdoor dining only, business has been cut to half of what it used to be. “It’s not good,” he said.

Boon has had to let some of his employees go and cut hours for the remaining servers.

“We’ve been holding on every month,” Boon said. In June and July when he could open for outdoor dining, it was “getting a little bit better,” he said.

But now “we don’t know how we’ll be in another three months, six months. … Eventually, if we keep going like this, we might have to go.”

Donald C., owner of the Italian restaurant All’Angolo Pizza & Pasta in Los Angeles, told The Epoch Times, “Obviously the people that make the rules aren’t the ones suffering; it’s the small businesses.”

He criticized Gov. Gavin Newsom for the controversial birthday party he attended at the upscale French Laundry restaurant in Napa Valley on Nov. 6. In attendance were at least a dozen people from different households, including representatives of the California Medical Association. The governor has apologized for attending the party.

Donald, who preferred not to have his last name published, said he thinks the restrictions have more to do with exerting control than with mitigating the spread of COVID-19.

He said the new order “is a bunch of crap.” He made other statements about it with stronger language as well.

“We are barely hanging on,” he said.

Kenya, a manager at Salsa & Beer in North Hollywood, told The Epoch Times, “There are a lot of people who want to come and eat here and have drinks,” so “of course there will be an impact.”

She said they’ll be working on making up new schedules with the human resources department, and employees will likely have their hours cut.

The new dining restrictions run in parallel with LA County’s “Safer at Home” order, which took effect on Nov. 30.

It bans most gatherings but stops short of a full shutdown on nonessential businesses. The order came, according to the Associated Press, as the county of 10 million residents reported 24 new deaths and 4,544 new cases of COVID-19.

In an attempt to overturn LAPHD’s order on Nov. 24, County Supervisors Kathryn Barger and Janice Hahn proposed a resolution to allow outdoor dining. But the order was upheld by Supervisors Sheila Kuehl, Mark Ridley-Thomas, and Hilda Solis.

“Businesses have made incredible sacrifices to align with safety protocols to remain open in order to pay their bills and feed their families,” Supervisor Barger said in a statement.“Our hospitalization rates are among the lowest we’ve seen. Yet, the rationale for further closures is tied to the number of patients in the hospital. We’ve come a long way to support workers and residents who are struggling to stay afloat, and should not regress.”