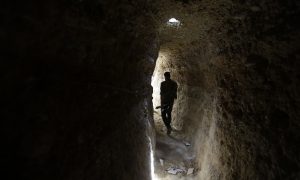 ANKARA, Turkey—As Kurdish rebels in northern Syria rack up wins against the ISIS group, Turkish media is abuzz with talk of a long-debated military intervention to push the Islamic extremists back from the Turkish border — a move that will also outflank any Kurdish attempts to create a state along Turkey’s southern frontier.

President Recep Tayyip Erdogan began chairing a National Security Council meeting Monday, only days after he vowed to prevent the Kurds from establishing a state in Syria.

Pro-government newspapers are rife with purported proposals, ranging from loosening the rules of engagement to give Turkish troops a freer hand to fire into Syria, to a tanks-and-troops invasion aimed at occupying a 110-kilometer (70-mile) long, 33-kilometer (20-mile) wide buffer zone.

The burst of tough talk has analysts “scratching their heads about what to make of all of this,” Aaron Stein, an associate fellow at the London-based RUSI think tank, said in a Twitter message.

In a telephone interview, Stein said the new talk of action was due in part to dramatic Kurdish gains in Syria, where rebels have scored a series of victories against ISIS, most notably in the border town of Tal Abyad. That key transit point is not far from the ISIS’s Syrian power base of Raqqa.

The capture of Tal Abyad opened ways for Kurds to connect their stronghold in Syria’s northeast to the once-badly isolated border town of Kobani — which famously resisted a months-long ISIS siege — and perhaps even the Kurdish enclave of Afrin in Syria’s northwest. That would create a vast, contiguous zone of Kurdish control, which Turkey fears will stir up separatist sentiment among its own Kurdish minority.

Ankara is also eager to shake accusations that it is turning a blind eye to the ISIS group — especially after photos were published showing the grinning fanatics within a stone’s throw of the Turkish border during the battle for Tal Abyad.

Stein said the pictures were embarrassing.

“You had ISIS fighters walking within 10 feet (3 meters) of the border, smiling and waving at Turkish border guards,” he said, using an acronym for Islamic State. “That gives the impression of complicity. It’s very damaging to Ankara.”

But the idea of military intervention across the border remains unpopular in Turkey. Any battles in urban areas would almost certainly mean heavy casualties in a fight against a determined and entrenched foe. The Dogan News Agency on Monday broadcast footage of what it said were ISIS extremists digging ditches and planting mines across from the Turkish border.

Even a more limited intervention, such as artillery or air strikes, could increase the flow of Syrians seeking shelter in Turkey, which is already burdened with the world’s largest number of refugees.

Fighting in Syria could also weaken the standing of Turkey’s Justice and Development Party, which recently lost its parliamentary majority and is now courting potential coalition partners to stay in power.

Most seriously, any fighting in Kurdish areas of Syria risks derailing the peace process with Kurdish rebels in southeastern Turkey, overturning a key achievement of Erdogan’s leadership and potentially spreading violence across the country.

“If there is a decision to attack the cantons in Rojova (the Kurdish-controlled areas of northern Syria), it would amount to an attack on all Kurdish people,” senior Kurdish rebel commander Murat Karayilan said in a statement Monday. “Such an intervention would be an intervention that takes Turkey to civil war.”

More modest forms of intervention in Syria seem likelier. Turkey has long pressed the U.S. to set up a no-fly zone — to no avail — and previous plans for a buffer zone have been shelved. Stein believes Monday’s meeting will probably result in orders to Turkey’s border forces to take their gloves off.

Meanwhile any hopes that recent rebel gains against the government of President Bashar Assad elsewhere in Syria had turned the dictator’s allies against him were knocked back by a surprise visit by Syria’s foreign minister to Moscow on Monday.